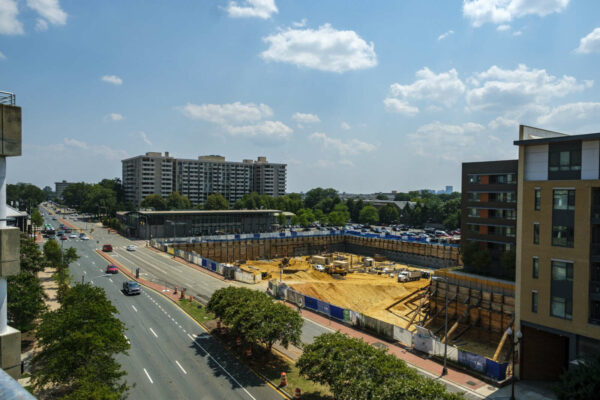 Here Comes the Next Cicada Generation — “Cicada nymphs have started hatching during the past week. They’re the offspring from our recent cicada swarm, and they’ll rain down from above for the next few weeks, with numbers totaling in the billions… wearing a hat in the woods is a good idea for the next few weeks. Just in case you walk under a tiny, divebombing nymph.” [Capital Weather Gang]

Rent Rising in Arlington — “It was upended during the worst of the COVID crisis, but the Arlington apartment-rental market continues roaring back to life, according to a data analysis by Apartment List. With an average rental rate of $1,962 for a one-bedroom unit and $2,375 for a two-bedroom unit, Arlington’s month-over-month rental rate in August grew 3.6 percent from July, compared to a 2.6-percent increase nationally, ranking the county 22nd among the nation’s 100 largest urban areas.” [Sun Gazette]

Unusual Robbery in Crystal City — ” At approximately 11:26 p.m. on July 29, police were dispatched to the report of a robbery by force. Upon arrival, it was determined that the victim observed an undisclosed amount of cash on the ground and collected it in an attempt to return it to its owner. The unknown male suspect approached the victim and attempted to take the money from his hands. The victim began to walk in the opposite direction and entered a nearby business, where Suspect One followed him and was joined by two other male suspects. Suspect One successfully took the money from the victim’s hands and all three suspects fled from the business in a vehicle.” [ACPD]

County Covid Testing Location Closing — “The #COVID19 mobile testing unit at Lee Community Center is officially retiring today, after administering nearly 15,000 tests throughout the pandemic. If you need a test, visit one of our three locations, open daily from 11 AM – 7 PM.” [Twitter]

Community Pantomime Performances — “As it prepares to resume in-person performances at its Crystal City venue, Synetic Theater will be headed into the community with a series of free public performances of the family-focused ‘The Miraculous Magical Balloon.'” [Sun Gazette]

Long-Distance 9/11 Walk Kicks Off — From the Arlington County Fire Department: “We were honored to host the kickoff for [the Tunnel to Towers Never Forget] Walk. The over 500 mile walk for CEO Frank Siller is meant to honor the heroism of first responders who lost their lives on 9/11.” [Twitter, Yahoo News, Twitter]

Reminder: Vote in This Week’s Arlies — Have a favorite real estate agent for selling your home? A favorite home renovation company? Let us know by the time voting closes at noon tomorrow. [ARLnow]