Fitness buffs, lap swimmers, curious residents and families with kids could be seen trickling into the Long Bridge Aquatics & Fitness Center this morning (Monday), on the opening day of the new facility.

A 12-year-old girl from Dorothy Hamm Middle School was the first to jump into the water, according to the Department of Parks and Recreation spokeswoman Susan Kalish.

Later, when an ARLnow reporter visited the facility, a five-year-old boy could be heard wondering how tall the diving boards were, while a handful of adults worked out upstairs in an 8,000-square-foot fitness center. More families showed up later in the morning.

The county put $2 million in donations from Boeing toward opening the center at 475 Long Bridge Drive this summer. At one point, a July opening seemed possible, but delays pushed the date back to August.

Four years after the project was approved, the 92,000-square-foot swimming and recreation facility — the second of four phases to redevelop Long Bridge Park — is officially open. It boasts a pool for serious swimmers and one for recreational swimmers, with numerous community amenities, from spas to community rooms.

“We have a full certificate of occupancy, but there is still a punch list” of tasks to complete before the center is fully done, said Peter Lusk, the athletic and facilities services division chief for the county.

Kalish said the parks department will transfer many of its swimming programs to the center, which “will help the community a lot,” as pre-pandemic, swimming classes hosted at pools in Arlington Public Schools filled up quickly.

Parks department classes are due to restart in mid-September, “the first time in 17 months,” Lusk said.

Competitive swimmers, water polo players and synchronized swimmers can use a 79-degree pool that can be configured for either 25-yard laps or 50-meter ones, using moveable starting platforms. There’s also an area for spectators upstairs.

The Aquatics Center “will be the home of the Arlington Aquatic Club,” Kalish said, referencing the county-run competitive swim program that helped to train Olympic medalist Torri Huske. “Younger ones will swim in school pool closer to home.”

Recreational swimmers can use a family pool with a splash pad, a water slide, four 25-yard lap lanes, a lazy river and a spa. The pool is 83-84 degrees for tots, seniors, and those doing therapeutic water activities. The lap lanes can be used for water volleyball and basketball, which Kalish said the department is “hoping this will be a draw for millenials.”

Nearby, “wet” meeting rooms can be used classes and for birthday parties.

Kalish shared grand visions for bringing out the community, from hosting big swim meets and using a large screen for movie nights, renting out open spaces and turning part of the facility’s new parking lot into farmer’s markets and wine tastings.

Boeing, for whom one pool is named, is making about 5,000 daily passes available to active duty military families in the USO of Metropolitan Washington-Baltimore’s service area for free through a lottery system. 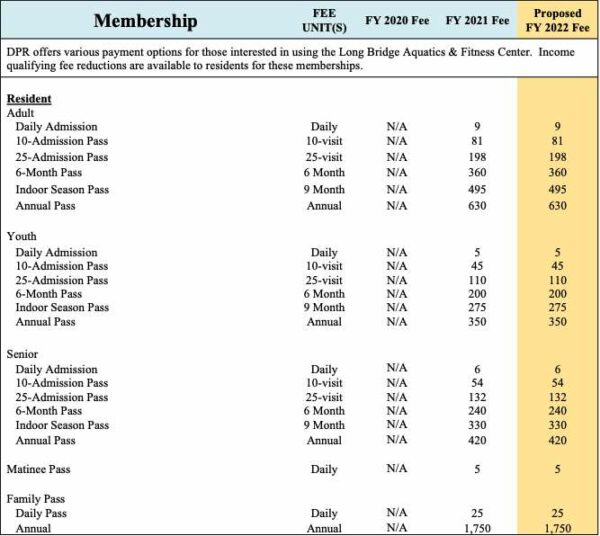 The project has been in the works for nearly a decade, attracting some controversy along the way.

Voters approved funding for the project in a 2012 bond referendum, but due to rising costs the center was put on hold in 2014. The County Board approved a $60 million construction contract in 2017 and broke ground in 2018.

But before the county considered an aquatics center, the area was once a whites-only private park. Then, it was home to warehouses, a steelyard, a brick factory and prostitutes, and was an Environmental Protection Agency superfund site, Kalish said.

“It cost so much money to clean this up,” she said, adding that some contaminated material was encased in concrete and used to build the esplanade, a raised walkway that overlooks the nearby playing fields, the Potomac River, National Airport and Roaches Run Waterfowl Sanctuary.

When the county started considering an aquatics center, Kalish likened original designs to “a Maserati” that had to be toned down after the Great Recession.

“People got grumpy because it changed,” she said. “I think it was being fiscally responsible.”