Fairgoers last week may have noticed a sign asking for their input on the best location for the Arlington County Fair.

That’s because after holding the event at the Thomas Jefferson Community Center and grounds at 3501 2nd Street S. for 45 years, the fair’s leaders are pondering a change of scenery.

The Arlington County Fair Board, an independent non-profit which manages the fair, has informed the county that it would like to move the fair to Long Bridge Park (475 Long Bridge Drive), Becky Schmitt, the acting deputy director of the Department of Parks and Recreation, tells ARLnow. 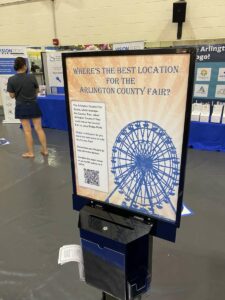 “As such an iconic event, a Site Review Committee comprised of subject matter experts from the Special Events Committee reviewed eight possible sites for the County Fair, including the fair’s current location and Long Bridge,” she said. “The most feasible options based on 21 event needs, such as location size, parking, and community impact, were to either remain at Thomas Jefferson Community Center and Park or move to Long Bridge Park (not inside the aquatics facility).”

The long-time location at the community center gives the fair a large grassy area next to an indoor community center space that’s used for exhibitions. This year, the grounds became muddy and rutted due to persistent rain.

Fixing damage to the field after the fair has been a frequent problem for the county, we’re told. The field is also used by nearby Alice West Fleet Elementary School and Thomas Jefferson Middle School.

The community center’s suburban location, meanwhile, is fairly central — near the middle of the county — but lacks Metro accessibility and has limited parking.

Long Bridge Park is not as centrally-located, but would offer more transit options, ample parking nearby, and sweeping views of D.C., the river and the airport — particularly from the ferris wheel, assuming it would be allowed within the DCA flightpath. The location might also draw more visitors from outside of Arlington, helping to bolster the fair’s finances.

The fair’s board and the Special Events Committee are soliciting community feedback, Schmitt said. Representatives from the fair could not be reached for comment.

At the fair, people were able to submit their feedback on a slip of paper in a dropbox. Post-fair, people can fill out an online survey asking whether and why they would prefer the fair to remain at Thomas Jefferson Community Center and Park or move to Long Bridge Park, or to another alternative location.

The survey also asks participants to check their top three considerations for choosing a site: such as adequate space, access to public transportation, location, impact on the neighborhood, parking availability, room to grow and access to indoor options.

So far, Schmitt said feedback has not yet been reviewed, but that it will figure into the final decision.

“Community feedback will help inform where the County Fair is held; however, the final decision will also consider the needs of the Arlington County Fair Board, public safety and the Fair’s impact to the community at large,” she said.

Dana Munro contributed to this report