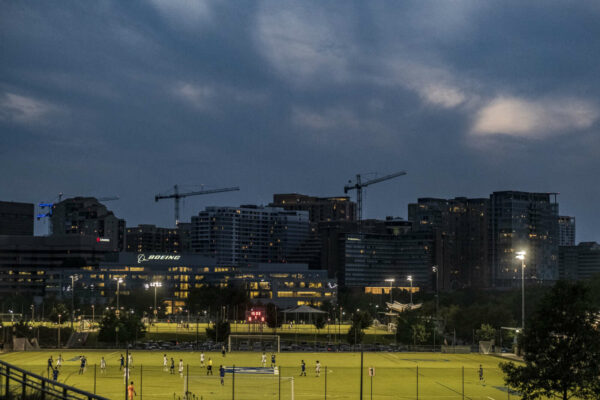 County Mulls Immigration Policies — “The Arlington County Board unveiled a draft framework for a Commitment to Strengthening Trust with Our Immigrant Community… ‘We are sharing an updated framework and seeking community engagement on policies on the next steps on access to public services, protecting resident’s information, and making sure Arlington County resources are not used to facilitate enforcement of federal immigration laws, which are the sole responsibility of the Federal government.'” [Arlington County]

Mixed Reaction to New County Logo — “For the Arlingtonians packed into outdoor restaurant seating on a warm night in Shirlington over the weekend, reaction to the new logo was mixed. ‘That’s what that is? That’s the river between Arlington and D.C.? I’m completely underwhelmed,’ said Lisa Peterson… But a few blocks away, Kaleb Tecleab, a 49-year-old security engineer, said he appreciated an ‘inclusive’ design that hinted at a greater sense of regionalism.” [Washington Post]

Local Teen Earns Prestigious Scholarship — “Adie Selassie of Arlington, a senior at Sidwell Friends School, was the only Virginian to be named a 2021 Calvin Coolidge Presidential Scholar. The program, overseen by the Calvin Coolidge Presidential Foundation, is a merit-based competition that provides full tuition, room, board, books and expenses for four years at a college of the student’s choice.” [Sun Gazette]

Crystal City Eatery Wins Award — From the National Landing Business Improvement District: “We are so lucky to have [Peruvian Brothers] as a part of our National Landing community! Congrats on the RAMMY! Well deserved!” [Twitter]

Grumbles About Slow Library Reopening — “On Saturday, the board of Friends of the Arlington Public Library blasted the county government to its very face (electronically-speaking) at the County Board meeting. In no uncertain terms, the organization (not generally known as a group of bomb-throwers) blasted the county government for multiple failures in setting the stage for an expeditious, safe reopening.” [Sun Gazette]

Nearby: Police Warn of Overdose Danger — “Fairfax County, Virginia, Police Chief Kevin Davis on Tuesday said six people overdosed in the predawn hours in [the Skyline area], and warned that a potentially fatal batch of cocaine laced with fentanyl might still be circulating in the area. All six victims, who ranged in age from 23 to 35, survived, although one victim is still ‘clinging to life’ in a hospital, Davis said. Three others remain hospitalized. They were found at a residence in the 5500 block of Seminary Road, near South George Mason Drive, a little after 3 a.m.” [WTOP]

END_OF_DOCUMENT_TOKEN_TO_BE_REPLACED

More Stories
Just Reduced Properties in ArlingtonPoll: Fall Is Here… Which Seasonal Change Do You Dread the Most?