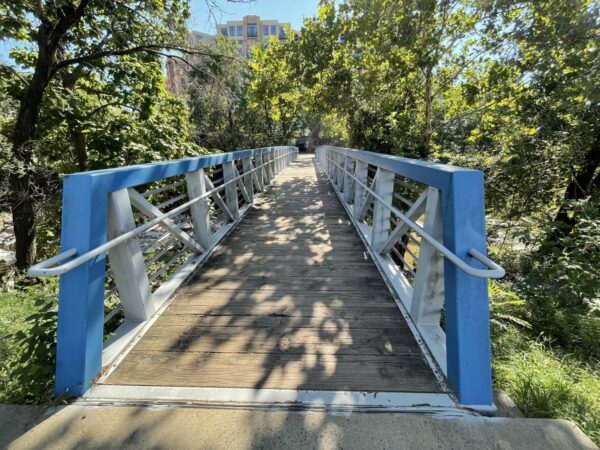 Blue Line Reopens — “On Friday, October 15, normal service will resume on the Blue, Orange, and Silver lines. Intermittent delays are possible as the investigation into Tuesday’s derailment continues.” [WMATA, Twitter]

Spotted: Bizarre Banner Bedecked Bus — From Nicole Merlene: “Outside the Courthouse today… What in the world? Civil service sure ain’t for wimps with crazies like this.” [Twitter]

Reuters Photo Shows Local Apartments — “A man sits on his balcony amid a sea of balconies at an apartment building in Arlington, Virginia. Photo by Kevin Lamarque.” [Twitter]

National Airport Getting Busier — “New data suggest the airport, which has had one of the most sluggish returns to normal(ish) performance in the COVID era, may be seeing better times for the rest of the year. New data from the trade group Airlines for America suggest that the airport will see just 11 percent fewer flights during the fourth quarter than during the same period in pre-pandemic 2019. That projected performance also is less than the 14-percent drop reported nationally, based on current flight schedules.” [Sun Gazette]

END_OF_DOCUMENT_TOKEN_TO_BE_REPLACED

More Stories
Just Listed in ArlingtonWatch Out on the Roads: Deer Are on the Prowl