A local agriculture-technology company is making it possible for people to buy pre-packaged goods based on how much carbon dioxide they save from entering the atmosphere.

EarthOptics, a startup with a significant Crystal City presence at 2461 S. Clark Street, uses artificial-intelligence to help farmers cheaply and efficiently map, report and verify how much carbon their farm land absorbs through the natural process of sequestration. This way, they can cash in on private- and public-sector incentives related to climate change mitigation.

Now, EarthOptics is using that data to let consumers support these farms more directly. With the labeling initiative, folks will be able to choose to buy products from food and beverage companies that source their ingredients from carbon-sequestering farms.

Consumers can expect to see the new label on certain products, especially from smaller food companies, in their grocery stores in 2023. The timeline will vary some depending on the growing season of particular crops. 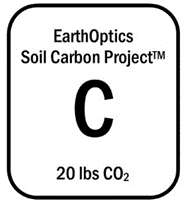 “Consumers will be able to look at our Soil Carbon Project label and appreciate that the corn used to make their cornflakes took one pound of carbon dioxide out of the atmosphere and kept it in the soil, or the grain used to produce a six-pack of beer took 20 pounds of carbon dioxide out of the atmosphere,” EarthOptics CEO Lars Dyrud said in a statement.

EarthOptics has already begun the verification process with some interested growers.

The CEO says most soil carbon-mapping methods are time-intensive and expensive, and only yield estimates. That makes it harder for farmers and the packaged goods companies that buy their crops to benefit financially from carbon sequestration.

EarthOptics technology lowers the cost and improves the accuracy of the measurements, making it possible to launch a labeling system, he says.

“For a labeling initiative to be successful, it needs to be accurate and trustworthy,” Dyrud said. “Measuring soil carbon retention for food and other consumer goods historically has been a costly and time-intensive endeavor. What we’ve been able to do at EarthOptics is move the soil carbon needle from estimation to accurate, verifiable measurements.”

Doing so has a host of benefits, Dyrud previously told ARLnow. Farmers are able to contribute to climate-change mitigation through carbon credit marketplaces, where large corporations such as Google or Etsy offset their carbon footprint by supporting businesses that sequester the greenhouse gas.

EarthOptics engineers and researchers are also tinkering with the technology so that it can map more soil properties, such as nutrient and moisture levels, which would combat climate change while making food tastier and more nutritious.

The Earth’s soil naturally sequesters carbon but some human activity — particularly farming — can stymie that natural process. When the soil is too hard or tilled too often, the carbon can’t seep into the ground and instead is released into the atmosphere, where it can remain for thousands of years.

While certain agricultural practices contribute to greenhouse gas emissions, others can reduce them. Scientists estimate that soils, particularly farm soils, could sequester more than a billion tons of additional carbon each year, according to EarthOptics.