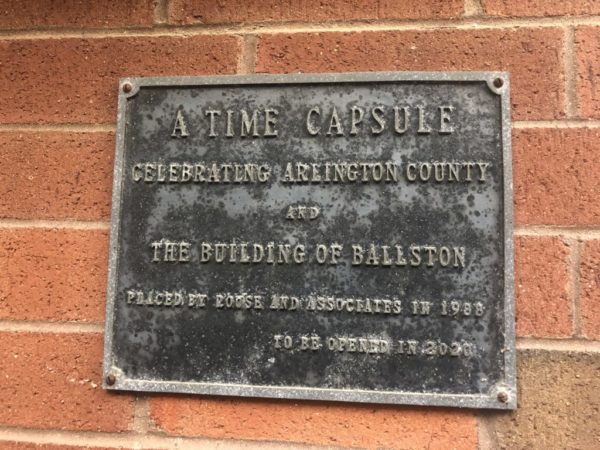 Well, it’s no Civil War gold, but there are buried artifacts in a Ballston office building just waiting to be uncovered.

A time capsule in Ballston’s Fairgate office building (1005 N. Glebe Road) was originally scheduled to be opened last year, but those plans got lost in the mix and now it’s unclear when or if the time capsule will be opened.

The building had been owned by real estate investment company WashREIT, but Deanna Schmidt said the building was sold in July and there had been no opening event prior to that.

“We actually sold the building to Brookfield back in July,” said Schmidt, WashREIT’s Vice President of Marketing and Communications. “We hadn’t opened it prior to that due to COVID. But perhaps the new team has done something.”

A manager at the Brookfield Properties regional office told ARLnow that he helped oversee the purchase of the Fairgate building but said there was no mention of the time capsule in their discussions. It was unlikely property management has done anything with the time capsule since then, he added.

So, for now, the capsule apparently remains buried.

We do have some idea of what’s in there thanks to Melinda Schaedig, who was a third-grader at Taylor Elementary School and contributed to the capsule when it was buried. Spoilers: items inside include a steering wheel with an airbag and Washington Redskins memorabilia.

Should the time capsule finally be opened, it’s unlikely to get as dramatic of a revealing as a recently-discovered 1887 time capsule received in Richmond, with the governor watching and television cameras rolling as preservationists removed each of the items.