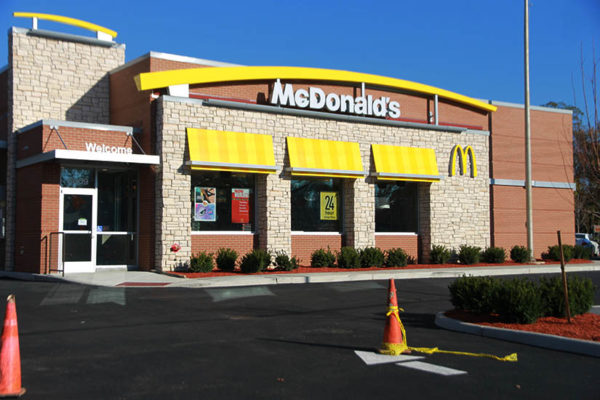 An employee at a local McDonald’s was beat up over an incorrect order last night.

The alleged incident happened around 11 p.m. Monday on the 5000 block of Wilson Blvd, in Arlington’s Bluemont neighborhood, west of Ballston.

Police say they were dispatched to “the report of a dispute at a business” when they spotted a vehicle matching the description of a vehicle involved in the dispute. They were trying to pull the car over, at the busy intersection of N. Glebe Road and Wilson Blvd in Ballston, when “the driver accelerated and proceeded through two red lights before coming to a stop.”

“The passenger, Suspect Two, then attempted to flee on foot but was located by officers and taken into custody,” said the Arlington County Police Department, in a crime report this afternoon “The driver, Suspect One, remained in the vehicle and was taken into custody.”

According to ACPD, the incident stemmed from an incorrect order the suspects received at a restaurant drive-thru.

“The investigation determined that the two suspects had become involved in a verbal dispute with an employee after receiving an incorrect order through the drive-thru,” said the police department. “Suspect One allegedly threw a water bottle through the window, before parking the vehicle and entering the business. Suspect One continued the dispute with the employee before the two suspects began physically assaulting and striking the employee.”

The employee was taken to a local hospital with what are described by police as non-life threatening injuries. Though ACPD generally does not name businesses that are victims of crimes, the only late-night drive-thru on that block of Wilson Blvd is the McDonald’s.

The suspects who were arrested, a man and a woman, are both in their mid-20s.

The woman, a D.C. resident whose first name is Justice, is charged with Malicious Wounding and Eluding Police. She was previously convicted of petty larceny in Arlington in 2018 and had her entire sentence suspended, but never paid the fine, according to court records.

The man, a resident of Capitol Heights, Maryland, is charged with Assault and Battery and Felon in Possession of a Firearm. His previous felony conviction was not in Arlington.

Both suspects are set to be in court for a bail hearing tomorrow.