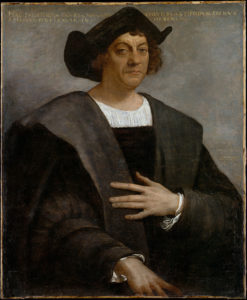 Columbus Day is the one federal holiday that Arlington County government does not observe.

Both because it’s a convenient holiday to swap for an off day on the unofficial holiday of Black Friday — the day after Thanksgiving — and because, despite his exploration feats, Columbus is regarded by some as “a murderer, tyrant, and scoundrel,” Columbus Day here is just any other day for county employees.

Of course, for many — including federal employees and Arlington Public Schools students — Columbus Day is a day off. But Columbus is not always mentioned as the reason.

“No School for Students (Countywide PL for Staff)” is how APS describes today’s day off, while other holidays on the school calendar are named.

Arlington Transit, meanwhile, is operating on a modified schedule, but Columbus is not credited.

“In observance of the Indigenous People’s Day holiday on Monday October 10, 2022, ART will be operating on a Saturday schedule,” the transit agency wrote.

Indigenous Peoples’ Day is now recognized by the White House, but started in the states, with South Dakota first adopting a version (“Native American Day”) as an alternative to Columbus Day in 1989 and other states like Alaska and Minnesota following suit in the mid-2010s. In some cases it’s used instead of the term Columbus Day, while in others it’s used in addition.

Columbus has his supporters, who tout his accomplishments despite all of the negatives associated with his journeys. And there are those who have simply always known today as Columbus Day and aren’t going to start calling it something else now.

But for others, calling the second Monday in October Indigenous Peoples’ Day is preferable.

With Columbus out of favor as a historical figure, especially locally, we’re wondering how many Arlington residents have, in their personal lives, taken to referring to today’s holiday as Indigenous Peoples’ Day instead of Columbus Day.