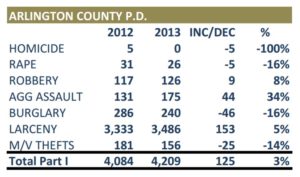 There was good news and bad news for Arlington County in the latest compilation of annual crime stats.

The good: No homicides were reported in Arlington County in 2013 — a 100 percent drop compared to the five cases in 2012. Rape cases decreased from 31 to 26, a 16 percent drop. Reports of burglaries were also down 16 percent and motor vehicle thefts experienced a 14 percent drop.

The bad: reports of aggravated assaults were up 34 percent in 2013 and robbery and larceny reports also increased slightly compared to last year with 8 and 5 percent increases, respectively.

The statistics were released this week by the Metropolitan Washington Council of Governments (MWCOG).

Neighboring Alexandria had a reverse situation concerning homicides in 2013. The area reported no cases in 2012 compared to five in 2013. Alexandria experienced a 40 percent rise in reported rapes during the same period.

One noticeable uptick in crime for the entire Northern Virginia area highlighted in the report involved bicycle thefts, although no specific numbers were given. (Last year, MWCOG highlighted the problem of cell phone theft.)

Many of those bike thefts occurred from unlocked garages and near Metro stops, according to MWCOG. Officials say they weren’t surprised considering the growing popularity of bike commuting and facilities tailored to pedal-powered commuters. The United States Census recently reported a 30 percent increase in residents using bikes to get to work. 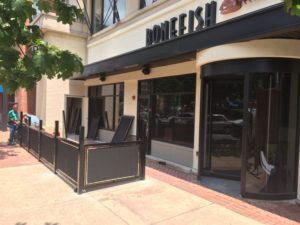 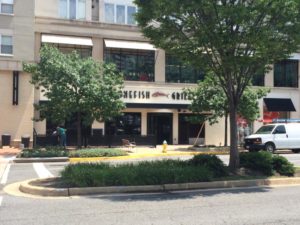 Bonefish Grill is on target to open its first Arlington location around the middle of next month, possibly as early as Aug. 18, according to employees.

The 5,350-square-foot seafood restaurant is located at Pentagon Row (1101 S. Joyce Street), in the space formerly occupied by Desi Innovations. The upscale eatery boasts fresh, wood-grilled fish and other specialties. It focuses on “simplicity, quality and consistency in food, service, ambiance and value,” and “leaves the stuffiness and unpronounceable menu out,” according to promotional materials.

Earlier today workers could be seen constructing the outdoor seating area in front of the restaurant. The chain has three other Northern Virginia locations, in Alexandria, Centreville and Fairfax.

The Beacon at Clarendon West, the new apartment building at the intersection of Washington, Wilson Boulevard and N. Irving Street, is set to open Aug. 15.

The two-tower Arlington apartment complex is already 23 percent leased, a leasing agent told ARLnow.com, adding that she expects a sharp rise in interest once the building is open and agents are working on site. Pre-leasing is happening down the street in the Courthouse neighborhood, at 1920 Clarendon Blvd.

The Beacon’s 187 apartments include 1-bedroom, 1-bedroom-with-den and 2-bedroom units ranging in price from $2,100-$3,000 per month. The Beacon touts itself as a “boutique” alternative to the larger apartment buildings in the area.

As for the retail frontage on Washington Blvd, a Jimmy John’s sandwich shop is expected to open later this year. No other tenants have been confirmed yet, but leasing agents say there’s been interest from several retailers.