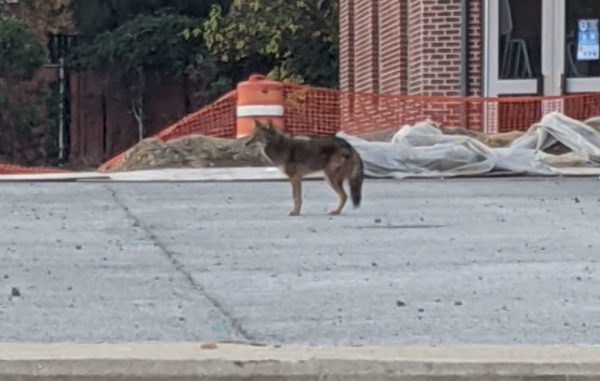 Coyotes have been known to roam around Arlington, but sightings of the bashful wild canines are relatively rare.

Nonetheless, a coyote is causing a stir in the Fairlington area after being spotted multiple times around the neighborhood, according to posts on a local Facebook group.

The Animal Welfare League of Arlington, which runs the county’s animal control operation, says it’s aware of the coyote sightings. The animal’s behavior, however, is so far not sounding any alarm bells.

“[We] received three calls from the public yesterday about a coyote spotted behind Abington Elementary School,” AWLA spokeswoman Chelsea Jones told ARLnow last night. “All the calls reported the coyote was exhibiting normal behavior, and by the time [an animal control officer] arrived the coyote was gone.”

“Coyotes do live in Arlington County, although sighting are typically rare,” Jones said. “They pose no threat to humans. We do, as always, recommend keeping your pets inside when not supervised, for this, and many other reasons.”

The last time we reported on an instance of a coyote spotted out in the open in Arlington was five years ago, when one was photographed along Washington Blvd.

“These animals learn to live next to humans and not mess with humans,” Arlington Natural Resource Manager Alonso Abugattas told ARLnow.com in 2014. “There have been cases, however, where feral cats and loose dogs, coyotes will occasionally eat a smaller dog, both as a competitor and as prey. Cats are considered prey as well. That’s the only way that they might affect the public.”

(Updated at 2:25 p.m.) A resident of Arlington’s Williamsburg neighborhood has caught a mangy canine on a wildlife camera.

Giles Crimi says he set up the camera to find out what was eating mice in his backyard, and discovered that it was an apparent coyote (or perhaps a fox).

“I’ve had some field mice destroying equipment covers in my shed,” Crimi explained. “I’ve had the problem before and noticed after they had been trapped and I tossed them outside, their bodies went missing pretty quickly.”

“This time I set the mice out and set up my field game camera, which shoots on motion detected,” he continued. “Now I know it is a mangy coyote in the neighborhood that is taking the free meal.”

There have been a number of coyote sightings in Arlington over the past few years, including one video that was shot and verified by county naturalists.

After numerous accounts of coyotes spotted in the northern half of Arlington, one has been spotted while apparently en route to South Arlington.

Eliana Kee snapped the photos above while heading westbound on Washington Blvd, just before the Fort Myer exit, around 6 p.m. Tuesday night.

“It was just sniffing around, close to a heavily trafficked road and not very hidden as you can see from the pictures, and didn’t seem to be in a hurry to get back to the cover of the undergrowth,” relayed Brian Kee.

Coyotes (or a lone coyote) have been previously spotted in Potomac Overlook Regional Park, near Lubber Run and in Cherrydale.

The closest thing to a recent coyote spotting in South Arlington happened last fall, when a dead coyote was found on Route 110 near Arlington National Cemetery. It had been struck by a car.

Coyotes are relatively rare in Arlington but experts say they don’t present a danger to humans.

“These animals learn to live next to humans and not mess with humans,” Arlington Natural Resource Manager Alonso Abugattas told ARLnow.com last year. “There have been cases, however, where feral cats and loose dogs, coyotes will occasionally eat a smaller dog, both as a competitor and as prey. Cats are considered prey as well. That’s the only way that they might affect the public.”

The second-ever confirmed coyote in Arlington County was hit by a car on Route 110 last Friday morning.

According to Animal Welfare League of Arlington Chief Animal Control Officer Alice Burton, the coyote was struck at about 9:30 a.m. on Route 110 near Arlington National Cemetery.

The responding animal control officer — who works for AWLA, the county’s provider of animal control services — removed the coyote from the scene and brought it back to AWLA, where it had to be euthanized, Burton said.

Arlington’s only previous confirmed sighting of a coyote was in April 2012, courtesy of a wildlife camera set up in Potomac Overlook Regional Park. Other sightings reported by residents have either been foxes or dogs mistaken for coyotes, Burton said.

Despite the cemetery’s location in the heart of the county, Burton said it didn’t strike her as shocking that that’s where the animal was found.

“Right by the cemetery you have pretty quick access to D.C., and I know Rock Creek Parkway has had problems with coyotes,” she told ARLnow.com. “I believe they’ve had more confirmations [of coyotes] in D.C. than we have.”

Arlington’s Natural Resource Manager Alonso Abugattas confirmed that the animal found was a coyote. The female was about 27 pounds — the average adult weighs about 30 pounds — but had young teeth, a bushy tails and many other indicators Abugattas used to confirm the species.

“It’s very small for a coyote but is much too big to be a fox,” he said. “It’s very slender, has no microchips or tattoos to indicate it’s a pet.”

Abugattas said although coyotes are rare in Arlington, the second one spotted in two years is no cause for alarm; the animals don’t present a danger to humans.

“The reality is, I don’t think they’re going to be any kind of issue,” he said. “These animals learn to live next to humans and not mess with humans. I don’t believe they would cause any kinds of issues to the public. There have been cases, however, where feral cats and loose dogs, coyotes will occasionally eat a smaller dog, both as a competitor and as prey. Cats are considered prey as well. That’s the only way that they might affect the public.”

A wild animal, believed by some to be a coyote, is causing increasing concern among Cherrydale residents.

The concern stems from Cherrydale resident Jay Stapf’s sighting of what he says were three decapitated fox heads on his back lawn this May. When Stapf went to retrieve his puppy, Stella, from the backyard, he was greeted by the sight of the severed heads.

“It was creepy, almost like when you bury someone in sand at the beach,” Stapf wrote in a report of the incident.

For the second time that month, Stapf called the Animal Welfare League of Arlington, who showed up to assist.

AWLA determined that a human didn’t sever the fox heads. They also suggested that Stapf install a motion sensor camera in his backyard in order to get further clues about the incident. However, Stapf says AWLA never followed up to confirm that a coyote was involved.

“We don’t know for certain [what they were] because they never came out and trapped them,” said Stapf.

AWLA Chief of Animal Control Alice Burton said that most of the time when people report coyote sightings to her, they turn out to be foxes, but this was a case that had her puzzled.

“It’s funny because I’ve reached out to professional naturalists on this and no one has a clue,” said Burton.

“Usually when we find decapitated animals, it’s kind of unusual. Heads are actually the first thing that animals eat,” said Alonso Abugattas, The Department of Parks and Recreations’s natural resources manager and one of the people Burton consulted with.

Sheila Dougherty, who walks Stella, had another neighbor who also reported a coyote sighting, so she decided to check with other residents on the Cherrydale email listserv.

“I think it’s good for everyone to know that there are coyotes in Arlington so that they can make informed decisions about whether to leave their dogs and cats out at night,” Dougherty said.

Eleven other members in the community wrote in with evidence of coyote sightings, with three others seeing a coyote as recently as this past spring.

Some of the sightings were indirect like Stapf’s. One neighbor reported seeing half a bunny in her backyard and the other indirectly reported a pet cat found dead through violent means.

END_OF_DOCUMENT_TOKEN_TO_BE_REPLACED

Coyote Spottings in Arlington? — Some residents in the Leeway Overlee area of Arlington have recently reported spotting a coyote in their neighborhood. While video has proven the presence of coyotes — or at least one coyote — in Arlington, naturalists question whether the animal spotted might actually be a fox or a mangy dog. [NBC Washington]

GOP AG Debate at GMU Law Tonight — The George Mason University School of Law in Arlington will host a debate between the two Republican candidates for Virginia Attorney General tonight. The event, which is open to the public, will start at 7:30 p.m. and will be moderated by former attorney general and governor Jim Gilmore. [Republican National Lawyers Association]

Arlington ‘Avoiding D.C.’s Traffic Nightmare’ — Arlington County has managed to avoid the “traffic nightmare” that’s facing nearby D.C. thanks to a “multifaceted effort to curb car-dependence” that serves as “a regional model,” according to WAMU. [WAMU] 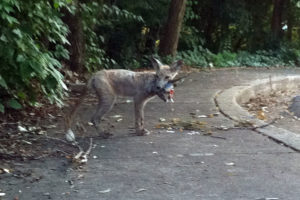 (Updated at 4:05 p.m.) Area wildlife experts are warning area homeowners to keep their pets inside at night after a couple of recent coyote attacks — including an attack at Daniels Run Park in the City of Fairfax on Monday.

Arlington is no stranger to the predatory canines, which have easily adapted to surburban and urban environments across the country. After years of reports of sightings, county naturalists in April confirmed their existence with video from Potomac Overlook Regional Park.

But naturalists are discounting the threat from a coyote-like animal that some residents have caught on camera around the Rosslyn area.

Last week reader Katherine Doty emailed us with a photo of the canine (above), which shows it with a bird in its mouth near the Iwo Jima memorial. Another reader sent in the photos below of what appear to be the same animal around 9:00 a.m. today (Friday) on Route 50 near Rosslyn.

“Some other pedestrians and I think it was a coyote,” the tipster wrote.

The animal, however, is very likely a dog (or a fox) and not a coyote, according to county naturalist Christina Yacobi. 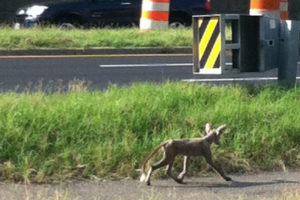 “That is not a coyote,” Yacobi said last week after taking a look at Doty’s photo. “That’s a really long tail for a coyote and coyotes have tails that are really bushy. They looked like they are dipped in ink. And they don’t have that long, pointy snout and those big, giant ears.”

Yacobi said it reminded her of a dog resembling an Ibizan hound or Pharaoh hound that went missing four years ago from a family traveling at Dulles Airport. Yacobi volunteered in the search effort.

Naturalists also say that spotting a coyote out in a populated area in the middle of the day is quite unlikely.

“Coyotes are very good at avoiding people, so residents shouldn’t be overly concerned,” Long Branch Nature Center naturalist Cliff Fairweather said in April. “The key is for residents not to feed them or encourage them not to be afraid of people. The longer they are afraid of people, the better it will be for coyotes and people.”

For a comparison, another shot from this morning near Route 50 and a file photo of a coyote (via Wikipedia) can be found below. 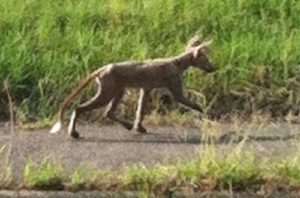 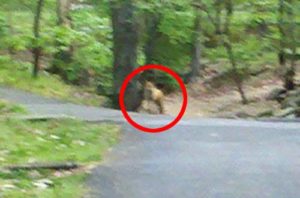 Now that we know for sure that there are coyotes living in Arlington, we’re starting to hear more reports of possible coyote sightings.

One resident sent along this tip and photo (above, left) after spotting what might have been a coyote in an Arlington park.

I was walking my dog yesterday morning (Sunday, 7:15AM) in Lubber Run and saw this by the bridge, at first I thought it was a fox, then realized it was too big to be a fox. Perhaps a coyote, it was definitely not a domestic dog. The tail was very long and bushy. It stood by the bridge for about a minute staring at me and my dog.