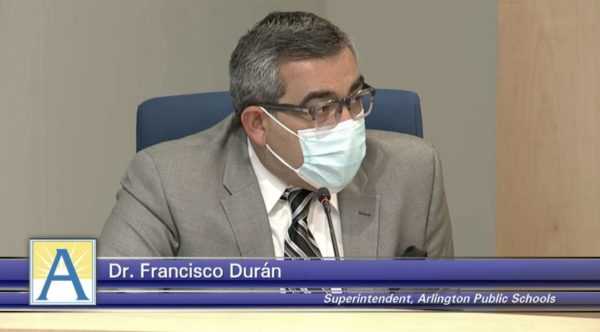 Arlington Public Schools is planning on paying workers whose job cannot be moved to telework through at least the first academic quarter, which ends on November 2.

Superintendent Francisco Durán laid out plans at the July 30 School Board meeting to have bus drivers and attendants, custodians, food service workers and Extended Day staff receive pay and a regular schedule during full-time distance learning.

“We honor and value all of our employees, and to strive and retain them as an excellent workforce during these unprecedented times, I am recommending that we continue to pay these employees throughout the first quarter of the school year… while we assess our long-term needs based on the changing situation and whether or not we return in hybrid,” Durán said in the meeting.

New roles could include “providing direct support to connect with students and families regarding access and engagement” and aiding in “virtual social-emotional learning student activities and support,” slides in Durán’s presentation said.

Some Extended Day staff will also provide childcare for teachers and staff at cost in designated school facilities.

Paying these workers is estimated to cost $3,072,000 for the entire first quarter. Bus drivers and attendants are already included in APS’s Fiscal Year 2021 adopted budget, so are costs from Extended Day and food service employees.

Durán said this expense can be mitigated by revenue from the services that staff would provide, as well as from federal funds.

APS is now contacting impacted staff to clarify plans and next steps. Schools have been closed since March 13.

Arlington school officials are planning some major changes to how parents register for the “Extended Day” program, following a variety of technical snafus with sign-ups over the last few years.

Parents looking to enroll their kids in the program, which provides low-cost before and after school care for students, will now be able to submit applications from April 1-May 15 each year.

If schools have enough room, anyone who applied before the May 15 deadline will earn a spot in the daycare service. At schools that receive more applications than they have “Extended Day” slots available, however, applicants will be entered into a “random, double blind lottery” to sort out who earns a spot in the program.

That represents a distinct change from the school system’s old process, which opened up registration on an online portal at a set time (often late at night), and only accepted applicants on a first-come, first-served basis.

That prompted parents to race to register all at once, resulting in a series of system crashes the last few years. Just last year, frustrated parents raced to the school system’s offices in an attempt to register in person, as the technical glitches persisted.

“We understand that the stress of being online early to register was a major imposition for many families and often led to system ‘crashes’ because so many people tried to access the system at the same time,” APS staff wrote in an online announcement explaining the “Extended Day” changes. “This new process will allow everyone to register anytime within the six-week period and all will now have the same opportunity for enrollment.”

School officials wrote that the program saw a substantial increase in enrollment over the last decade — growing from “about 2,600 to over 4,300” students — which they believe contributed to some of the school system’s technical glitches.

APS staff hope this new process means that “all families will have the same opportunity to register, regardless of the time registration opens, access to computers, work schedules and other extenuating factors.”

Officials stressed that no decisions about “Extended Day” enrollment will be made until after May 15 under this new system, and any child who misses out on a spot in a lottery process will be placed on a waitlist. The school system noted that nine elementary schools (Abingdon, Arlington Science Focus, Ashlawn, Claremont, Glebe, Henry, Key, McKinley and Tuckahoe) have reached capacity for the program in the past, making them likely spots for lotteries.

School officials also urge any parents applying for an option school to wait until those results are released on May 1 before applying for “Extended Day” inclusion.

The new process has already irked at least one parent, who told ARLnow that they’re concerned that the school system has created “an entirely new registration process, without a public discussion.”

“If you are going to run a true lottery process, as they seem intent on doing, they need to conclude it much earlier than May 15, so families have an opportunity to make other arrangements if they don’t get lucky,” the parent wrote in an email, declining to give their name. 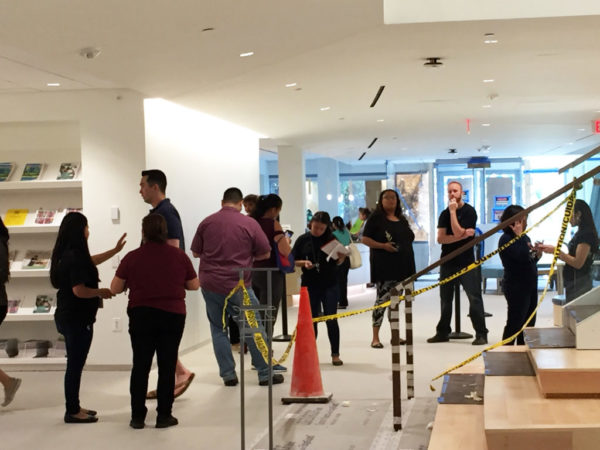 Arvaye Robinson, the mother of two elementary school girls she had hoped to enroll in the Arlington Public Schools extended day program, stood in front of the Syphax Education Center this morning during the system’s technical problems that ultimately suspended sign-up indefinitely.

“I’m so disappointed,” Robinson said, exasperated, with her phone in her hand waiting to hear from a school staffer. “I wanted some confirmation.”

“They have the means to take payment, but no concrete confirmation,” said Robinson.

A father who overheard ARLnow interviewing Robinson cut into the conversation, calling the situation absurd and saying that it had thrown his work schedule out the window for the second year in a row.

Indeed, this is the second consecutive year that extended day registration has flopped. There are varying reports of exactly how many parents waited in line to secure a spot for their children, but one parent told ARLnow she saw at least 100 people in the Syphax Education Center’s lobby this morning.

The extended day program allows parents “who can’t juggle everything” to leave children in their school’s care before and after classes, according to the program’ director, Bobby Kaplow.

According to Kaplow, after last year’s technical failure with the same vendor, APS spent the year troubleshooting with the contractor, trying to find a solution.

“All year we worked with him, we told him what we needed, we told him what the problem was, can he see it on his end,” Kaplow said, adding that he had demanded that the contractor fly in from Michigan to be on-site for the enrollment rollout today in case any issues cropped up.

“I talked to him 20 minutes before it started today, and said, ‘Are we good?'” Kaplow said. The contractor told the director that there wouldn’t be any problems.