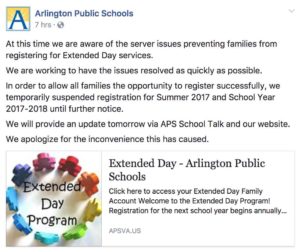 Extended Day registration opens at midnight on March 1, meaning that those fighting for a spot in the popular program stayed up late trying to register — until APS finally notified parents that it was closing the registration indefinitely until the problems can be fixed.

The issues occurred less than 12 hours after the Arlington County website went down due to technical issues that affected numerous sites around the web on Tuesday. It was not immediately clear if the Extended Day glitch was related.

At this time we are aware of the server issues preventing families from registering for Extended Day services.

We are working to have the issues resolved as quickly as possible.

In order to allow all families the opportunity to register successfully, we temporarily suspended registration for Summer 2017 and School Year 2017-2018 until further notice.

We will provide an update tomorrow via APS School Talk and our website.

We apologize for the inconvenience this has caused.

Here’s what one self-described “angry parent” said about the snafu, in an email to ARLnow.com:

Every year, at midnight on March 1, working parents are forced to take part in this cruel system that requires them to stay up til midnight and beyond.

I was up until 2 trying to get on before giving up. So I’m at work today with only 4 hours of sleep. (APS expects me to deliver my daughter to school on time the next day.)

APS sent out a notice at 1:30 a.m. saying they will have to do it all over again.

I hope this incident sheds light on an unnecessarily cruel system that forces parents, who obviously have jobs to go to or they wouldn’t need aftercare, to stay up half the night hitting refresh buttons to make sure they have affordable aftercare.

“Please open registration at a reasonable hour,” another parent said in response to the APS Facebook post.