After only six months on the job, Artisphere’s programming director has decided to leave.

Rosanna Ruscetti joined the struggling venue in October, and was seen as someone who could help stabilize it. Just this year, Artisphere received accolades for its exhibit featuring famed Mexican artist Frida Kahlo.

Prior to working at Artisphere, Ruscetti had served as a programmer at George Washington University’s Lisner Auditorium for 18 years. She had also been a consultant for arts programming and business development.

Ruscetti will be leaving for family reasons, we’re told.

According to a job posting, the new program director will have to plan performances and exhibits, negotiate contracts, and develop and manage a $500,000 budget. The position has a pay range of $53,580 to $88,545 annually. 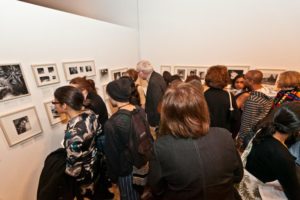 Last night the public got its first look at Artisphere’s exclusive exhibit of personal photos from famed Mexican artist Frida Kahlo. Nearly 2,000 people showed up for the opening night.

Dignitaries from Kahlo’s native Mexico, such as Alejandra de la Paz from the Embassy of Mexico and Jefe Delegacional en Coyoacan (similar to a mayor) Raul Flores Garcia, also attended. Coyoacan is a suburb of Mexico City, and a sister city to Arlington.

The exhibit contains 259 of the artist’s personal photographs. Artisphere is the only venue in the United States to display these photographs. The free exhibit will run through March 25.