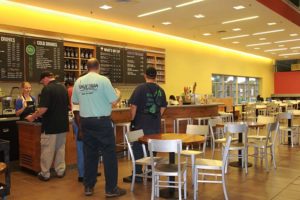 (Updated at 4:55 p.m.) Customers at the Whole Foods store in Clarendon (2700 Wilson Blvd) can now sit back and enjoy a coffee, or something a little stronger, at the newly opened “Arlington Pub.”

The venue is on the second level of the store, but customers may also bring their beverage purchases downstairs while they shop. According to Clarendon Whole Foods Marketing Team Leader Jackie Zovko, it just passed inspection on Friday, employee training took place this past weekend, and the pub officially opened for business yesterday (Monday).

Right now, the focus is on drinks. The pub offers 100% certified organic coffee, draft beers and wines by the glass. All of the beers are made withing a 200 mile range and will rotate based on availability and customer feedback. Right now, the list includes Dogfish Head Punkin Ale, Lost Rhino Rhinofest and Port City Derecho Common Ale. Wines, which will also rotate, run from $4-$6 per glass.

Eventually, the pub will start serving snacks such as cheeses and olives from the specialty food departments downstairs. The goal is to begin serving from a more extensive menu at some point in the future.

Several other Whole Foods stores in the D.C. metro region also launched pubs this year. Zovko believes customers in Arlington will enjoy the ability to relax with a drink.

“It’s based on what our customers want,” she said. “It’s also great for us because we’re able to feature things that are in line with our core values — 100% organic coffee and also local beers.”

Customers have been trickling since yesterday as they look up and spot the pub. Zovko believes the convenience makes the pub stand apart from similar bars in the area.

“Being able to grocery shop and then come upstairs for a quick beer or to linger a little bit, it’s kind of a nice idea,” said Zovko. “We love Arlington, we love the community, and we just feel like there’s room for everybody.”

A grand opening celebration had been originally scheduled for this week, but has been pushed back due to some delays in get permits and opening the venue. The new date is Thursday, October 4 from 5:30-7:30 p.m. It involves a special installation of the ongoing “Wine :30” events on Thursdays, which highlight wines and food pairings. This time, the “Beer O’Clock” event will feature beers at five stations throughout the store, with the fifth station being in the new pub. There’s a $5 fee to participate. The pub will also offer happy hour specials and free coffee during the grand opening.

For a while, we’ve been offering a readers an email newsletter called the ARLnow.com Afternoon Update. We buried the link to the sign-up page because, well, we weren’t thrilled with the functionality. The emails looked kind of sloppy and we couldn’t get it to send at the exact time we wanted to.

Now, we’ve switched to a new service and we’re excited to tell you all about it. The new Afternoon Update will be sent at 4:00 p.m. daily, just in time for you to catch up on the day’s stories before heading home from work. The headlines are easier to read, it’s easier to subscribe and unsubscribe, and it’s now the sign-up confirmation emails are less likely to get caught in your spam filter.

Click here to sign up now. Did we mention it’s completely free and we won’t send you any spam or extraneous emails?

Existing subscribers: you have already been moved over to the new service. 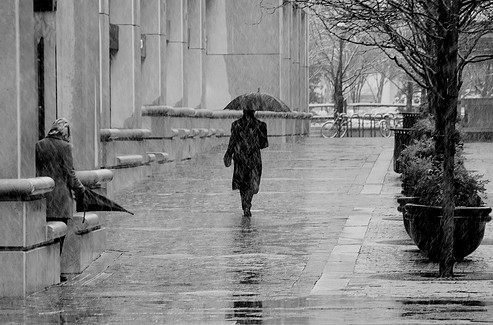 On this cool and rainy Monday, we wanted to take the time to thank the more than 100 photographers who have joined our Flickr pool.

If you haven’t already, head over to Flickr and check out the nearly 500 photos that have been added to the pool so far. You’ll see great examples of photographers who were able to show Arlington in a whole new light.

ARLnow.com now has a Facebook page. Become a fan and be the first to know about news and events in Arlington.

You may have noticed it on the menu bar already, but if not, here’s the official announcement. We’ve rolled out a new feature, the Arlington Events Calendar.

Events — from middle school musicals to county budget hearings to bar crawls — will be added continuously. We’re hoping  to make this the most comprehensive source for things to do in Arlington. But it could be even better with your help.

Do you know of something cool going on around town? Submit it.

Are you a business owner who would like to add to the calendar directly? Email arlingtonnews [at] gmail [dot] com for a login.