The following letter to the editor was submitted by Mary McCutcheon, a North Highlands resident. 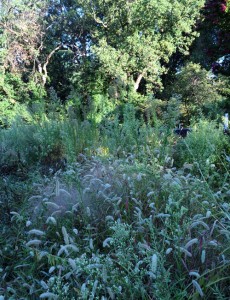 What is a “weed?” I posed this question to two of the inspectors in Arlington’s Code Enforcement office and was told by both that their definition comes from Webster’s dictionary. Before you continue reading, you should look it up and see for yourself if this venerable old lexicon provides any clear standard. O.K. Are you finished? So now that we know what we’re up against, I want to say that this vague and subjective definition is the basis for Arlington’s property maintenance code and people are getting citations that can incur very material and costly, not to mention invasive, penalties for those who are defiant.

I have a vacant piece of land where I am about to build a new house. Over the summer it became covered with multiple species dominated by Conyza canadensis and bristlegrass, both native meadow species, as well as Tradescantia virginiana, perennial lilies, and Monarda which had all begun to look droopy as their flowering season came to an end. Until construction begins, I thought the land was better off with a cover of vegetation, especially these species which attract birds and pollinators. When I got a notice that I had violated the weed ordinance, I was hurt and ashamed and a little indignant all at once.

I phoned the inspector who had issued me the citation and asked what a weed was. That is when I learned that Webster’s dictionary is the botanical reference book that Arlington County uses (per directions of one of Arlington’s attorneys, I learned). I then asked this inspector if Joe Pye weed, Butterfly weed, and Milkweed were “weeds” and, after a painful pause, he blurted “Ma’am, I’m not an arborist.”

In the meantime, the people promoting native plants and rain gardens are explicitly encouraging Arlington citizens to plant more and more of these “weeds.” Let’s make sure the code is consistent with the policy and protect the residents, as well as the flustered inspectors, from confusion.

Responding to my objection that code enforcement is mostly complaint-driven, the inspector replied that citations mainly result from routine drive-by surveys. When I pointed out that a property only a block away from my property had poison ivy tumbling into the road and porcelain berry and other invasive vines growing all over the chainlink fence and it’s barbed wire top, the inspector replied: “Well, if you want something done about it, you should file a complaint.”

Why do we have such codes in the first place? It is not to keep up an aesthetic standard in neighborhoods, as you might have thought; it is, according to the code itself, only to address health and public safety threats. And, according to the inspectors, “weeds” are more often associated with insects, rats and snakes than non-weeds. The truth is that scorched earth clearing and exposed pools of standing water are most often associated with mosquito larvae; vegetable gardens, bird feeders and exposed food waste are most often associated with rats; and the rocky edges of streams such as Four Mile Run are havens for copperhead snakes.

Home owners should not be denied their property rights without compelling public interest. The remote suspicion that one might possibly imagine that there may conceivably be a non-zero probability that a mosquito, a rat, or a snake lives on someone’s land doesn’t cut it.

There was a tense moment for Arlington County Police today as officers confronted a man dressed in camouflage and armed with a shotgun near Rosslyn.

The incident happened just before noon on the 2100 block of N. Scott Street, in the North Highlands neighborhood. A resident called police, reporting a man dressed in camouflage in the woods of Dawson Terrace Park. The man was pointing a shotgun at something, the caller said.

Officers located the man, ordered him to drop the weapon and then took him into custody. Upon further questioning, officers determined that the man was an Art Institute student videotaping himself for a school project, according to Arlington County Police Department spokesman Dustin Sternbeck.

The man was informed that possessing a firearm is prohibited in county parks, then released without charges.

“He was not aware that he was in the wrong,” Sternbeck said. “No charges were filed. He just packed up his truck and left.”