With more than 150 new students set to attend classes at the Arlington Career Center in the coming school year, officials are now scrambling to free up some extra classroom space at the facility.

The county school system now plans to move eight trailers over from the adjacent Patrick Henry Elementary School to free up room for those students in the 2019-2020 school year. Career Center Principal Margaret Chung informed parents of the move in an email Monday (Feb. 25) that was subsequently obtained by ARLnow.

Chung wrote that school leaders initially hoped instead to move students into the second floor of the Columbia Pike Branch Library space, which is located in the Career Center. But county officials rejected that request, prompting the reliance on the so-called “relocatable classrooms” instead.

“To accommodate our expected growth next year and beyond, we have had to identify space for the additional students,” Chung wrote.

The downside of that move is that the trailers will take up some space currently used for the Career Center’s Animal Science program.

The program includes classes focused on animal care and veterinary science, with a variety of animals housed at the site for students to study. Chung expects that the trailers will take up the space currently set aside for three grazing animals — APS spokesman Frank Bellavia says that includes two goats and a miniature pony — forcing the Career Center to “reimagine that program for a more urban setting.”

“This does not mean that we are discontinuing our focus on animal sciences,” Chung wrote. “We will continue to maintain the smaller animals onsite for learning and instruction.”

She added that her staff has “begun to explore options to find a new home” for the animals that need to move, with the goal having them settled by the time the new trailers are in place this summer. That’s also when the school system will move the Montessori program currently housed at Drew Model School into the Henry building.

But with demand for the Career Center’s programs anticipated to only keep growing in the coming years, and the planned expansion of the building to accommodate more high schoolers still years away, Bellavia says the new trailers won’t solve all the building’s space limitations.

Accordingly, APS officials plan to ask the county for permission to use both the first and second floor of the library as instructional space, Bellavia said, with the goal of having it available for students in time for the 2020-2021 school year.

It’s a move that “comes as a surprise” to Kristi Sawert, the president of the Arlington Heights Civic Association and a member of working group that spent months studying the planned expansion and renovation of the Career Center.

Eventually, the school system plans to build room for another 1,050 high schoolers at the facility. But the process of doing so has been a thorny one, with Sawert and other local parents pressing the school system to add a full suite of amenities at the site to make it equivalent to the county’s other comprehensive high schools.

Still, Sawert says that the need to take up the library space for the new students was “never mentioned” during the working group’s deliberations, some of which included the library’s future. The group suggested that the county could ultimately buy up some properties near the Career Center and use that land for a stand-alone library.

“We were told repeatedly during the [working group’s meetings] that internal modifications to the Career Center would accommodate the incoming class of 150 students,” Sawert wrote in an email to concerned neighbors she provided to ARLnow.

Roughly nine years ago, the county kicked off a firestorm of controversy when it proposed shuttering the Pike library and moving its offerings to the Arlington Mill Community Center. The branch has been located at the facility since moving there in 1975.

While moving students into the library space (and the changes to the animal science program) may end up ruffling a few feathers, Chung chose to paint the impending changes as indicative of the demand for the center’s programs.

“We are so pleased to see the excitement and interest in our programs, and it is extremely rewarding to know that more and more students and families want to be part of the opportunities that our programs provide,” she wrote. 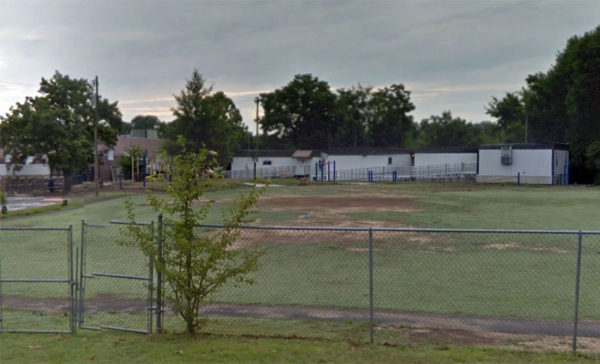 As Arlington Public Schools continues to grapple with ever-increasing enrollment, the school system is continuing to add relocatable classroom trailers to over-capacity schools.

Superintendent Dr. Patrick Murphy included $2.6 million in his proposed budget for the purchase of relocatable classrooms next school year. As the trailers are parked outside of schools, there is increasing concern about the loss of open, recreational space.

At Arlington Science Focus School, near Virginia Square, the PTA recently expressed concern that two additional relocatables, slated to be added next school year, would have to be placed on the school’s blacktop — thus resulting in the loss of a recess and phys ed area. (Four relocatables are already placed on a field outside the school.)

The PTA, working with APS, came up with a solution already at place at some other schools: a “six-plex” modular school unit that houses six classrooms and a common space, not unlike this one. The consolidated unit would cut down on the amount of open space taken up.

There are already five “six-plexes” in Arlington: two at McKinley Elementary and one each at Claremont, Oakridge and Taylor elementary schools.

APS spokesman Frank Bellavia says the school system works with schools, parents and neighbors to figure out the best way to place relocatables at schools. But the need for the modular classrooms, he said, points to the need for APS to continue building new schools and school additions expeditiously.

“We work with school leadership and the neighboring community to find the best location for the relocatables,” Bellavia said. “This is why we need more seats for more students.”

After the jump: the letter from the Science Focus PTA to parents.

END_OF_DOCUMENT_TOKEN_TO_BE_REPLACED 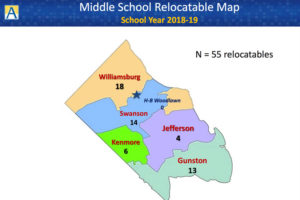 More trailers are coming to Swanson and Williamsburg Middle Schools.

According to a new report from Arlington Public Schools, the relocatable classrooms have been deemed the best solution to address overcapacity at the two North Arlington schools.

“In light of all of the opportunities and constraints associated with the options under consideration as well as the community feedback that has been received, APS Instruction and Facilities staff has determined that the use of on-site relocatable classrooms is the most effective, flexible, and least disruptive approach to address interim capacity needs at Swanson and Williamsburg middle schools through 2019,” APS said in the report.

APS plans to have 18 trailers in place at Williamsburg and 14 at Swanson, as an temporary solution to overcrowding until the middle school at the site of the former Stratford Junior High is built in 2019, APS said.

Each trailer costs about $300,000. The new trailers can stand against 90 mile an hour wind and are equipped with bathrooms and water fountains.

“Relocatable classrooms offer the same technology and similar configuration as regular classrooms, and they provide access to water and bathrooms,” APS said. “The staffing and quality of instruction expected from APS schools remain at the same level for both relocatable and traditional classrooms.”

No student would have all their classes during the day in relocatable trailers, the report notes.

“If a grade-level community is located in relocatable classrooms, there are multiple opportunities for students to move to and from the main building throughout the day. For example, students transition to the field space or the gym for physical education, to another classroom for electives, and to the cafeteria for lunch,” APS said.

APS has formed “school-based facilities committees” at Swanson and Williamsburg to evaluate the effectiveness of the trailers while they are at the middle schools.

“These planning groups are actively collaborating with APS staff and school administrators to determine the most appropriate and effective use of the additional relocatable classrooms, given the unique physical and programmatic attributes of each school community,” APS said.

While Williamsburg and Swanson are not the only middle schools facing capacity issues, they are the two with the greatest need.

“All middle schools are projected to be at or over capacity by 2019 and as a result APS will need to address capacity issues at Kenmore, Thomas Jefferson and Gunston in the coming years,” APS said.

As of earlier this year, APS was planning to add six trailers at Kenmore, four at Thomas Jefferson and 13 at Gunston Middle Schools. 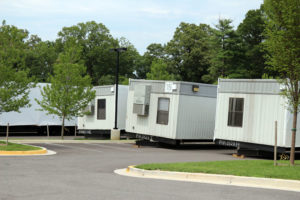 With schools bursting at the seams and student growth outpacing new construction, Arlington Public Schools Superintendent Patrick Murphy is proposing to place 71 new relocatable classrooms around Arlington elementary and middle schools over the next five years.

Murphy’s plan, which he presented to the School Board last week, calls for 27 new relocatables for elementary schools in South Arlington by fall 2020. By fall 2019, Murphy plans for middle schools around the county to add 44 new trailers.

In five years, that would bring the total number of trailers for middle schools and South Arlington elementary schools to 120.

Relocatables are just one part of APS’ response to the Arlington County Board’s denial of a plan to build a new elementary school at Thomas Jefferson Middle School. Other ways to mitigate school overcrowding that could be implemented are: converting computer labs to classrooms; making internal modifications like the ones just approved at Washington-Lee High School; and moving programs to facilities with more space. 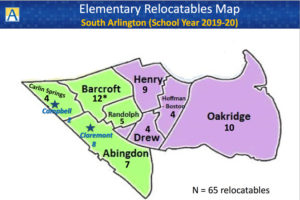 When asked how many seats the average relocatable classroom provides, APS Community Liaison Meg Tuccillo responded “It varies by school depending on the program using the classroom, needs of the school and class size guidelines,” and provided no specifics.

In Murphy’s plan, none of those facilities are used, but Tuccillo said “we are considering use of county sites offered for interim solutions.” She did not offer more specifics on which facilities APS is considering, how they might be used or when.

While the relocatables are interim solutions, APS and the School Board are also laying the groundwork for permanent relief of school overcrowding. The County Board and School Board must approve a new South Arlington elementary school by December, Murphy said, for it to be ready for the 2019-2020 school year.

If the two sides cannot reach a decision by then, South Arlington will have to wait at least two years longer than initially promised for a new school. Staff is continuing its community outreach process and gathering more information to recommend a site for the new school, but no specific alternatives to the preferred Thomas Jefferson site have been identified.