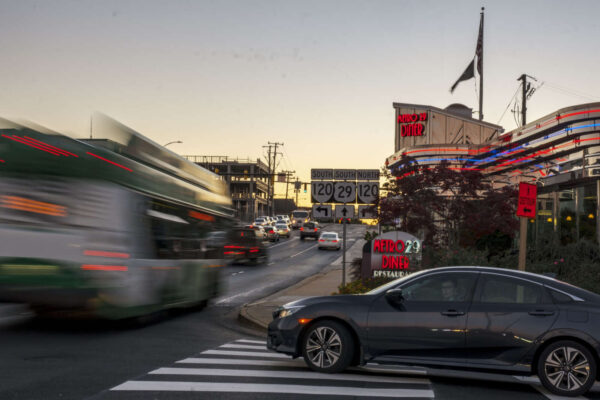 Grand Opening for Big Rosslyn Development — “Real estate developer Penzance welcomed Arlington County officials to the grand opening of The Highlands, a mixed-use project in Rosslyn at the top of the hill on Wilson Boulevard. The Highlands, a 1.2-million-square-foot development, consists of three high-rise residences — named Pierce, Aubrey and Evo — with views of the D.C. area and several amenities. ‘We’re proud to be here today welcoming these 890 new residences, exciting retailers, Fire Station 10 and the beautiful Rosslyn Highlands Park.'” [Patch]

Reward Boosted in Ballston Murder Case — “The Ratigan family is announcing an increase in their reward fund from $25,000 to $50,000 for information leading to an arrest and conviction of the suspect(s) responsible for Scott Ratigan’s homicide on January 17, 2020. Detectives continue to follow-up on any and all investigative leads in this case and remind the public that any information, regardless of how small it may seem, could be the tip that leads to justice on behalf of Scott and the Ratigan family.” [ACPD]

Retired Police K-9 Dies — “With great sadness, ACPD announces the passing of retired K9 Drago, a 14 year-old old German Shepard, Belgian Malinois mix. He loyally served Arlington from 2008 to 2019 as a patrol and narcotics detection K9. We kindly ask that you keep him and his handler in your thoughts.” [Twitter]

APS Getting Ready for Kid Vax Approval — “APS continues to work with the County on plans for rolling out the COVID-19 vaccine to students ages 5-11 once it is approved, which we anticipate very soon. Once approved, we will inform the community about the availability of doses and how to schedule appointments. Arlington County Public Health anticipates holding clinics and scheduling vaccinations by appointment, hopefully by mid-November. We will keep families informed as new information is received.” [Arlington Public Schools]

Man Seen Stealing GOP Signs — “We’ve received reports of stolen yard signs, and — while we appreciate your updates — almost none of those are actionable because the tipsters don’t provide us any physical/visual evidence. But kudos to one resourceful sleuth, who provided us with these fairly clear photos of a guy taking down Youngkin signs in Arlington last night.” [Arlington GOP, Twitter]

In Defense of Audrey’s Age Answer — “Apparently what happened is that the paper wanted candidates to fill out online questionnaires, and the computerized program didn’t allow respondents to skip the ‘age’ question. So Clement wrote in a younger figure as something of a protest in requiring candidates to answer a question she feels is inappropriate. From this, the Post tried to make a big deal. Turns out the Posties, as is often the case, missed the context. Clement wasn’t lying to them, as they contend. She was f*cking with them. A big difference.” [Sun Gazette]

Arlington Artist Performs on NPR — From National Public Radio: “The Tiny Desk is back… sort of. The first concert recorded at Bob Boilen’s desk since March 2020 is 2021 Tiny Desk Contest winner Neffy!” [Twitter]

It’s Thursday — Today will be partly sunny, with a high near 65, getting progressively cloudier throughout the day. Sunrise at 7:31 a.m. and sunset at 6:11 p.m. Tomorrow (Friday) will be rainy and windy, with storms and flooding possible. Expect a high near 63.

Police plan on handing out a lot of tickets to children around Arlington this summer. But the tickets are the kind kids will actually want to receive.

The Arlington County Police Department teamed up with 7-Eleven for “Operation Chill” to reward good behavior. The program allows police to “ticket” Arlington youth spotted doing good deeds — with a coupon for a free small Slurpee good at 7-Eleven stores across the county.

Some of the “offenses” officers might give out a coupon for could be a kid helping another person, wearing a bicycle helmet, picking up trash or participating in other positive community activities.

“We look forward to participating in Operation Chill each year, as these coupons provide an excellent tool for our officers to encourage responsible behavior within our community,” said Chief M. Douglas Scott.

Since the program began in 1995, Arlington County officers have distributed tens of thousands of Slurpee coupons to children. 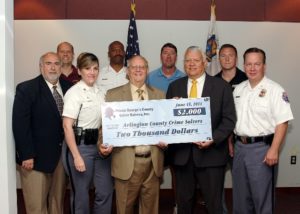 Arlington County Crime Solvers has received a grant from a place some people might think unusual–a Crime Solvers program in another state.

Arlington County Crime Solvers President Andres Tobar says because some people who witness a crime don’t feel comfortable talking to police, they may not report the information at all. Crime Solvers allows these people to call in anonymously, and receive a reward for tips that lead to an arrest and conviction.

Tobar emphasizes that criminals often commit crimes in a variety of neighborhoods, so jurisdictions need to work together to catch the offenders.  He says it’s in the best interest of all jurisdictions to make sure that people from neighboring communities can call in tips.

Tobar also says that there has been much turnover on Arlington’s Crime Solvers board, and they are actively recruiting. He notes that Prince George’s County has a strong board, and this grant helps show the commitment to improving Arlington’s board.

“This is a very nice shot in the arm for us,” Tobar said.  “It’s also a gesture of faith on the part of Prince George’s County that we will use this to move our organization forward. We will not disappoint them.”

Any members of the business community who want to get involved or join the Arlington Crime Solvers board should contact Andres Tobar at 202-841-7998, or [email protected] Citizens who have tips to anonymously report can call Crime Solvers at 1-866-411-TIPS (8477).

Arlington County Police are searching for a man suspected of sexually assaulting a seven-year-old girl outside a South Arlington laundromat on Sunday.

Police say the man approached the girl while her mother was inside the laundromat at 3600 Columbia Pike.

“The suspect pulled the child inside a small play house and sexually assaulted her,” police said in a statement. “The child was taken to a nearby hospital for treatment.”

The man is described as Hispanic, 5’1″, 130 lbs, with brown eyes, bushy black hair and a mustache. Police will be canvasing the area around the laundromat today, handing out flyers with the suspect’s sketch and information about the crime.

Anyone with information about the suspect should call Arlington County Crime Solvers at 866-411-TIPS (8477). A reward of up to $1,000 is being offered in the case.