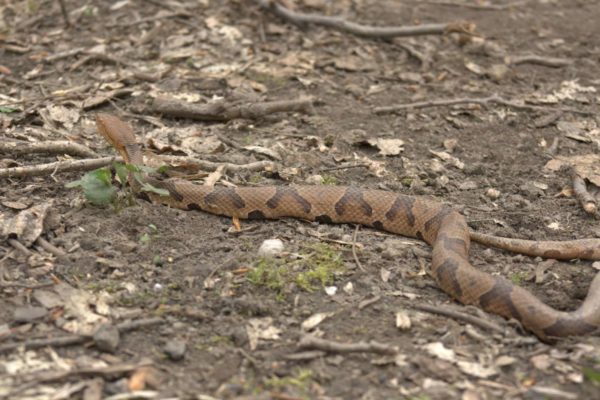 If it seems like you’ve been seeing more reports of snakes around Arlington on local listservs, you’re not alone. Arlington County officials said there’s been a noticeable uptick in reported copperhead snake sightings.

Alonso Abugattas, the county’s natural resources manager, said there has been an increase in copperhead snake sightings but that the exact numbers are hard to track down because he, Arlington’s nature centers, and animal control all get and respond to calls about snakes.

“This past year I have gotten more,” Abugattas said, “but I expect there’s been more because more people are outside.”

Abugattas said with coronavirus keeping people at home rather than in their offices, the increase in calls may have something to do with people exploring their local parks during the day, when copperhead snakes are more active.

“Parks have had a 200% increased use because people are at home and bored,” Abugattas said. “I think more than anything else, people are more aware of them.”

The local emergency room is also seeing evidence of rising encounters between snakes and humans.

“We’ve had a few patients with copperhead bites recently,” Mike Silverman, head of the emergency department at Virginia Hospital Center, wrote last Friday. “As someone who trained and worked for a long time in Baltimore City, it’s seems so weird to see snake bites in what’s otherwise an urban area but they are definitely in Arlington.”

He encouraged anyone suffering from a snakebite to get a photo of the snake.

“Pictures of dead snakes are great,” Silverman wrote. “Please don’t feel the need to bring the snake into the ER, even if it’s dead, though it does add a little excitement to the shift.”

The copperhead is one of only three venomous snakes found in Virginia and the only one found in Arlington County. Ken Rosenthal, park naturalist at Gulf Branch Nature Center (3608 N. Military Road), said in a presentation last Thursday that they are most likely to be found in Gulf Branch and along the rocky, forested hillsides along the Potomac River.

Despite being venomous, Abugattas said there have only been one or two cases nationwide of copperheads killing humans, and even those had other factors. Neither of them, Abugattas said, were in Virginia.

“It is, for the most part, a very timid snake,” Abugattas said. “Even when they do bite, about one-third of the bites are dry bites — a warning.”

END_OF_DOCUMENT_TOKEN_TO_BE_REPLACED 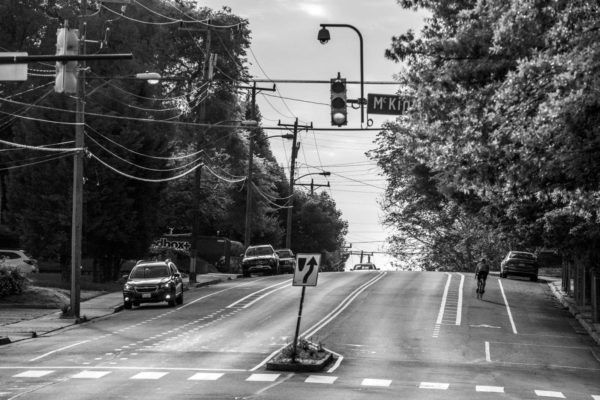 Reopening Starts Today — Arlington and Northern Virginia is starting Phase 1 of a gradual reopening of the regional economy today. You’ll be able to dine outside, get a haircut, and shop at non-essential businesses, with restrictions. Additionally, starting today, Virginia is requiring people to wear masks in indoor public spaces. Face coverings are also required in ART buses. [Arlington County, Arlington Transit]

Local Leaders Promote Mask Usage — Leaders of Northern Virginia’s local governments, including Arlington County Board Chair Libby Garvey, star in a new video encouraging the use of masks as the region reopens. [YouTube]

Arlington Orgs Providing Food During Pandemic — “Since May 1, CHFA volunteers have delivered 6,174 meals to homebound COVID-19 positive patients and immunocompromised clients, with plans to provide an additional 14,000 meals over the next two months, in partnership with Jeffrey’s Catering. Since the state of emergency declaration on March 15, referrals to AFAC increased by 36 percent, from 3,606 individuals to 4,902 on May 10.” [Arlington County]

Marymount Holding Graduation Parade — “On Friday afternoon, members of Marymount University’s graduating class will celebrate their accomplishments through a Graduation Parade, with faculty and staff cheering them on along a four-mile route that loops between Main Campus and the Ballston Center.” [Press Release]

Local Snakes Face Sticky Situation — “Our Animal Control officers are always on hand to help animals in need, even the scaly ones! Today we got a call that 2 snakes were stuck to a glue trap. Sgt Ballena and Officer Citrone worked hard to gently un-stick the snakes and release them safely nearby.” [@AWLAArlington/Twitter]

ARLnow Receives Google Grant — ARLnow has received a modest grant from Google’s Journalism Emergency Relief Fund. The grant will allow ARLnow to host a paid intern this summer. The pandemic has negatively affected ARLnow’s business, and at the same time has also caused a shortage of internships nationwide. We’re grateful for Google helping us to offer an internship to a promising young journalist. 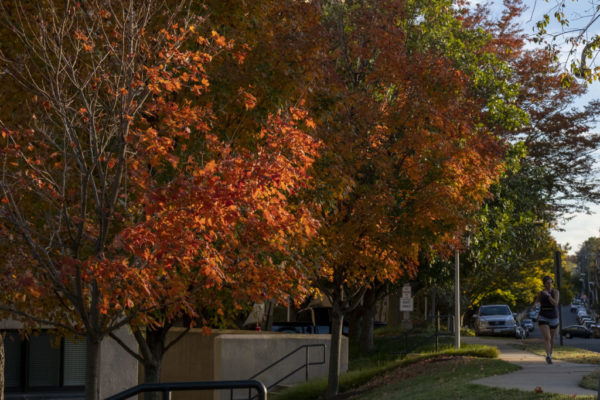 School Shuffle Blowback Starts — “Alicia Rich, president of Key’s PTA, said she has been fielding texts and messages over WhatsApp from parents and staff members worried about the prospect of moving. ‘This issue is so huge for us,’ Rich said.
School system officials said they ‘urgently need’ the Key building as a neighborhood school because of the lack of space for students.” [Washington Post]

Arlington Office Market Improving — Arlington County landing Amazon HQ2, a selection announced one year ago this month, has helped move its office market in the right direction after years of struggles. The office vacancy rate in National Landing, the newly branded area comprising the Crystal City and Pentagon City neighborhoods, dropped from 19.6% in Q3 2018 to 16% as of Sept. 30, the lowest level since 2012, according to JLL.” [Bisnow]

Chamber Supports Keeping Dillon Rule — “Facing a possible Democratic majority in the General Assembly, @ArlVAChamber is standing firm in its support of the Dillon Rule. Why? A Dem majority could allow localities like Arlington to raise the minimum wage.” [Twitter, InsideNova]

Storms Don’t Deter Trick or Treaters — From a family that tracks the number of trick or treaters visiting their Arlington home: “Despite threatening weather and a tornado watch issued by the National Weather Service… 2019 was our second best year ever with 161 visitors, 13 goblins behind the all-time high of 174 visitors in 2016.” [Facebook]

ACPD Helps With Snakes, Too — “Sgt. Morrison proves he’s a jack of all trades! Yesterday he responded to a citizen assist call and helped safely relocate this snake.” [Twitter]

Opera Fans Plan Outreach Effort — “Reports of the demise of a certain musical genre are not just premature. They are just plain wrong, supporters say. ‘Clearly, opera is not a dying art – the music is still transcendent,’ said Paul Dolinsky, a board member of Opera Nova, which on Oct. 27 held its annual fund-raising brunch at Washington Golf & Country Club.” [InsideNova]

Local Teen Is Runner Up in Entrepreneurship Competition — “Ela Gokcigdem has good news to share about her ePearl noise-cancelling wireless earbuds. They were a big hit in the Big Apple… The 17-year-old senior at Wakefield High School in Arlington participated in the NFTE National Youth Entrepreneurship Challenge. More than two dozen competitors from around the country pitched their products to a panel of judges.” [WJLA]

Nearby: Road Closure Planned in Seven Corners — “The Wilson Boulevard (Route 613) bridge over Route 50 (Arlington Boulevard) will be closed from 9 p.m. Monday night, Nov. 4 to 5 a.m. Tuesday morning, Nov. 5 for bridge deck work, according to the Virginia Department of Transportation. Eastbound Wilson Boulevard traffic will be detoured via Route 7, Patrick Henry Drive, Route 50 and the westbound Route 50 service road back to Wilson Boulevard.” [VDOT]