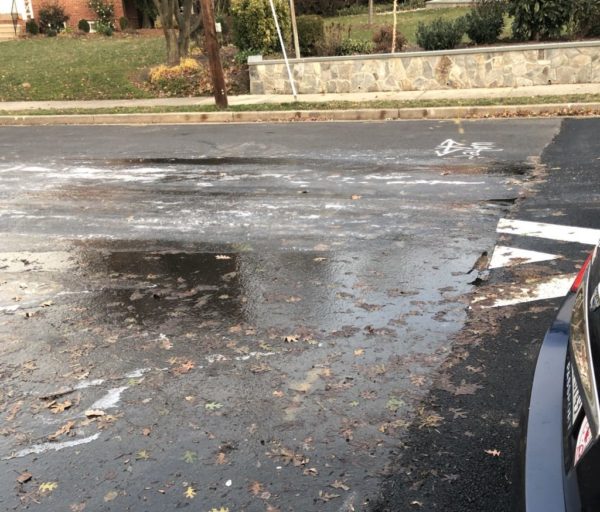 Some Yorktown residents say their neighborhood has become an icy mess at times over the last few weeks — and they believe a newly installed speed bump is to blame.

County officials still aren’t sure of the exact problem on the road, but they aren’t willing to blame the speed bump quite yet. Regardless of the exact source of the issue, people living along 26th Street N. as it runs between N. George Mason Drive and N. Glebe Road, say they’re desperate for a solution.

“We have had to have the county send salt trucks twice since [last] Friday to specifically address the road downhill from the speed bump,” David Miller, who lives along the 4900 block of 26th Street N., told ARLnow via email. “We expect this will be worse as we have more days below 32 degrees. We have not seen any accidents yet as a result of the ice/water, but have had our own cars slide while coming out of our driveway, so we fully expect it is only a matter of time.”

Miller says the road first started getting soaked with water about six months ago, the day after the county removed a speed bump from the area. Accordingly, neighbors can’t help but draw a connection between the two events.

However, he says the issue wasn’t serious until about six weeks ago, when the county installed a new speed bump and temperatures started to dip, leading residents to inform county officials about the problem. Everyone living in the area is convinced this is due to a leak of some kind, Miller said, but the county hasn’t come to a definitive conclusion just yet.

Katie O’Brien, a spokeswoman for the county’s Department of Environmental Services, says workers are indeed “actively investigating” what’s going on in the neighborhood. She says county staff “have been unable to identify a leak” thus far, making it possible that there are other factors at play in the area.

“Due to the record amount of rain we have received this year, there are a number of locations throughout the county that are supersaturated and the standing ground water may give off the appearance of a water main leak,” O’Brien wrote in an email. “We are also monitoring these locations as a precaution.”

Miller does give the county credit for its responsiveness to the issue, but remains frustrated that the problem is still unsolved all these weeks later. With temperatures continuing to plummet, he fears what will happen if the county still can’t find a fix in the coming months.

“Everyone on the street is concerned for the danger that the ice is creating,” he said.

Aging speed bumps throughout the county are set to be replaced or repaired under a new contract.

The County Board is expected to approve a $246,275 contract for the maintenance work, which will focus on traffic calming fixtures from the 1990s and early 2000s that are badly deteriorated “due to weather and vehicular traffic.”

Speed humps and speed cushions are two of the ways by which the county calms traffic, and typically they are repaired when the street is repaved. However, according to county staff, “some devices’ conditions require substantial repair or replacement outside of the normal timeframe of the street repaving.”

The contract will go to Alexandria’s Kathmar Construction, Inc., which bid less than half that of the only other bidder for the project.

In past years, Arlington has been ranked as having some of the worst drivers in the nation. That doesn’t surprise Brian Meenaghan, who has started a Twitter account to document what he views as a never-ending parade of bad drivers on his block.

Meenaghan, an Arlington Heights resident, started the Twitter account @BadDriversof1stRdS at the end of April. The account focuses on the worst offenders on the 3600 block of 1st Road S., a one-way street located in a high traffic area around S. Glebe Road, Route 50 and the Thomas Jefferson middle school and community center.

“I started this account as a cathartic thing because we’ve had a lot of frustrations on our little block. We’re about 400-450 feet long as a block and we dead end at a middle school,” said Meenaghan. “We have people whipping up this block and people coming the wrong way from the middle school. Because of the oddity of the exit for Route 50 around Glebe Road, we also have a lot of people turning around in driveways and going back up the wrong way, trying to go back to 50.”

Meenaghan’s main concern is drivers going the wrong way on the one-way street (traffic is supposed to only flow from S. Glebe Road to Old Glebe Road). From cars to school buses and even Metrobuses, Meenaghan has caught all types of drivers driving the wrong way or speeding — or both — on the narrow street. Photos and video posted to the Twitter account document the broken traffic laws. (See some of the tweets, below.)

“I work downtown and I’m not here physically during the day all that much and I personally see three or four people turning around every day. I’m probably outside maybe 45 minutes to an hour before dinner with my daughter and I see in just that short amount of time a lot of people going the wrong way,” said Meenaghan.

The Twitter account is a joint venture with his neighbors, who often supply the photos he uploads to the website. Meenaghan said he and his neighbors have been trying for years to convince Arlington County to implement traffic calming measures on the block.

“My neighbors are all very involved in this,” said Meenaghan. “I’m not here that much so I’m not here to take a lot of these pictures. You miss a lot of them because they happen so quickly. Probably six of my neighbors have given me photos over the last couple of weeks. It’s kind of a group-wide effort.”

Part of the impetus for the effort is that the block is now chock full of children.

“We now have 15 kids on this block. There are only 23 houses and there are 15 kids under the age of 10. There have been five kids born in the last six months,” said Meenaghan. (One could perhaps see the block as a microcosm of the challenges with burgeoning enrollment facing Arlington Public Schools.)

Along with the kids living on the block, the presence of Thomas Jefferson Middle School at the end of the block means that there is a constant stream of kids on the block during the school year. It’s only set to become busier, with continued growth at the middle school and the construction of a new elementary school on the middle school’s former parking lot.

END_OF_DOCUMENT_TOKEN_TO_BE_REPLACED

Police in Fairfax County tell the Washington Post that a man was murdered over the weekend because of his advocacy of speed humps. Police say that Stephen Carr and David Patton had argued before about Carr’s campaign to build a speed hump on the street in front of his Burke home. Then, on Sunday, investigators say an enraged Patton tied up Carr and Carr’s girlfriend, then shot him in the head.

Of course, such extreme acts of violence over neighborhood disagreements are rare. But in speed hump-filled Arlington, it’s easy to be left with the unsettling feeling that such an act of madness is not completely outside the realm of possibility.

Over the past few years, a civil war of sorts has been waged over the mounds of asphalt that force drivers to slow down lest they damage their vehicles. A 2006 article described one such situation in North Arlington as a “pitched battle” and “class warfare at its worst.” A 2008 article, also about Arlington, called speed humps “the ultimate suburban battleground,” pitting “neighbor against neighbor and, more often, resident against motorist.”

So we ask: What’s the angriest you or someone you know has gotten over speed humps? (Or other “traffic calming” measures.)