A Courthouse fitness and massage center is relocating into a larger space not far from its old home.

Arctic Integrative Health and Wellness Center is moving into a vacant office space at 1401 N. Adams Street, near the neighborhood’s Residence Inn and Fire Works Pizza, according to signs posted at the location.

The company, which offers personal training and other coaching services, was previously based at 2055 N. 15th Street, near the Courthouse Metro station.

The new space represents a bit of an expansion compared to the old location, and Arctic made the switch final on Sunday (Feb. 3), according to the company’s website.

The location was previously home to My Thrive Pilates, which closed after the company shuttered all of its locations, including studios in Falls Church and Shirlington, last spring. 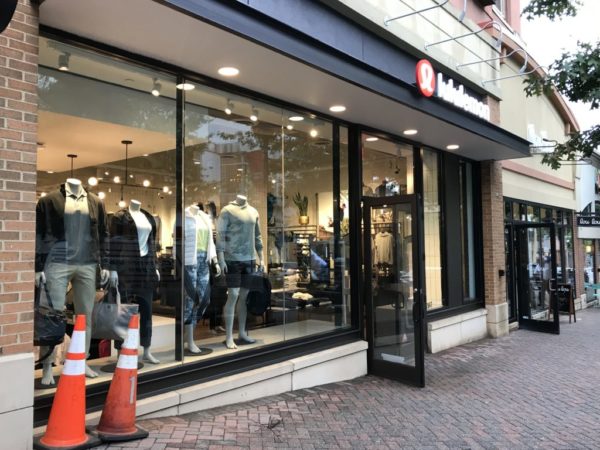 After a brief move across the street this summer, Lululemon is back home at 2847 Clarendon Blvd.

The athletic apparel retailer temporarily relocated to “The Loop”  at 2700 Clarendon Blvd earlier this summer while the main location underwent renovations.

The store moved back in and showed off its reconfigured interior last week with a grand reopening party.

The athletic retailer announced the move on the store’s Facebook page Sunday (June 24). As of Tuesday evening, the store was still holding its “Rooftop Sweat Series” on the roof above its old store.

The business is moving a mere half a block, from 2529 Wilson Blvd to 2601 Wilson Blvd (near the corner of Wilson and N. Daniel Street). However, according to realtor Bill Buck, the move will more than double the boutique’s square footage.

Current Boutique has signed the lease for the new storefront, but renovations are still in progress. Buck estimates the business will move to their new location within the next couple of months.

The bohemian women’s clothing store Free People closed its Clarendon location as of the end of last week.

The clothing store’s staff could be seen packing away the stock last Thursday. There are now signs up in the window of the store, at Market Common Clarendon (2700 Clarendon Blvd) indicating that Free People will be moving to a space in Georgetown next month.

The Market Common location was one of two Free People stores in Arlington; the other location (1100 S Hayes Street) remains open.

On Thursday the store wrapped up a move from its former location at 3924 Wilson Blvd to the new location at 4501 N. Fairfax Drive. The new running store is located next to a FedEx office location, across from the Marymount University “Blue Goose” building at the corner of Fairfax Drive and Glebe Road.

While the new store doesn’t have the surface parking lot of the former location, it is validating parking at the building’s underground garage off of N. Vermont Street.

Store co-owners Ray and Cathy Pugsley told us last month that the move was prompted in part by the former location’s lack of street visibility, concern that the single-story shopping center they used to be in would be redeveloped, and the new location’s better proximity to the Custis Trail. 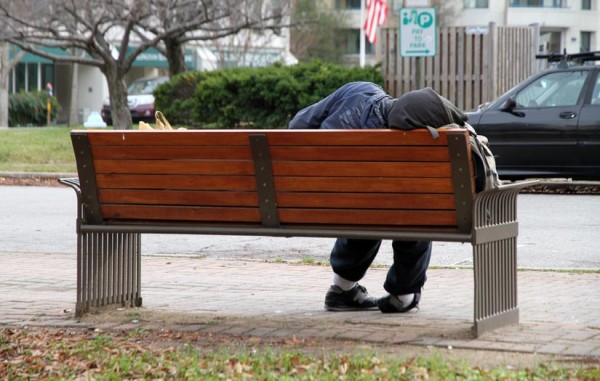 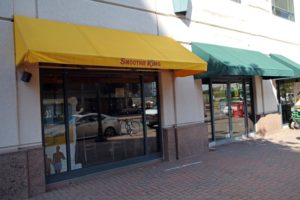 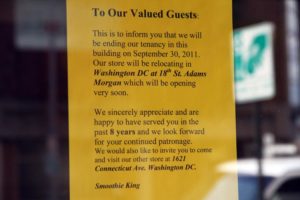 The Smoothie King in Ballston has given up its throne in an effort to conquer Adams Morgan.

The eatery, at 850 Randolph Street, across from Ballston Common Mall, is now closed. A sign in the window says the store is moving to 18th Street in Adams Morgan.

According to a tipster, employees hauled off store furniture last night. A sign above the store has already been taken down, though posters remain in the windows. 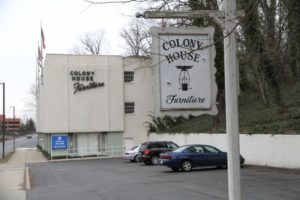 The Colony House Furniture store at 1700 Lee Highway is set to be torn down to make way for an extended stay hotel.

The recognizable building has been sold to the B.F. Saul Company, the Bethesda-based developer behind the recent Clarendon Center project. Last week representatives from Saul presented their redevelopment plan to the North Rosslyn Civic Association. Under the plan, an eight story extended stay hotel will be built on the 1.2 acre site at the corner of Lee Highway and N. Quinn Street. The hotel will include eight stories of guest rooms on top of two stories of above-ground parking.

(The parking must be built above ground since the site sits on solid rock. The building will technically be ten stories high from the Lee Highway side, but will only be considered eight stories due to the steep elevation near the rear of the site.)

Saul told residents that they’re in negotiations with two companies to operate the hotel — Marriott’s Residence Inn and Hilton’s Homewood Suites. They’re aiming for a LEED Silver certification for the building.

The company says zoning allows them to build an 88-room hotel on the site by right. Saul, however, will be seeking County Board approval later this year to build a 154-room hotel with 96 parking spaces. After presentations to the Rosslyn Business Improvement District, the North Rosslyn Civic Association, and three Colonial Village associations, Saul’s Mary Beth Avedesian says the company has yet to hear any neighbor opposition to the project.

END_OF_DOCUMENT_TOKEN_TO_BE_REPLACED 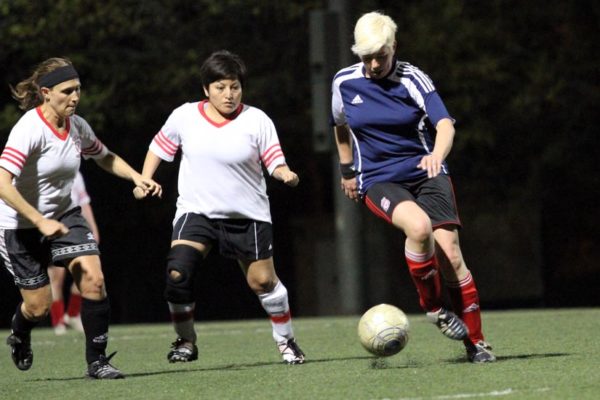 McLean Residents May Sue Over Redistricting ‘Insult’ — McLean residents are apparently none too pleased that their pristine ‘burb has had its state Senate representation split in two by redistricting. One of the new McLean districts is the 31st, which also includes most of North Arlington. One resident said it was an “insult” to have their neighborhood lumped in with Arlington. A McLean citizens group is contemplating a lawsuit over the redistricting outcome. [Sun Gazette]

Curious Grape to Hold Moving Sale — The Curious Grape will be closing its Shirlington location at the end of the month. To help prepare for the move to a new, thus-far-unannounced location, the store is holding a moving sale. Alexandria-based wine-and-cheese retailer Cheesetique will be taking over the store after Curious Grape moves out. [Shirlington Village Blog]

How to Score Free Coffee — Patch has come up with a comprehensive guide for scoring free coffee in and around Arlington. Among the tips: pretend like you’re interested in the espresso maker at Williams Sonoma and ask for a sample, go car shopping and ask for coffee, or get free samples at Whole Foods. [Patch] 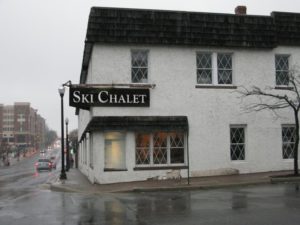 After more than 40 years in business, Ski Chalet is packing up and heading west.

The Columbia Pike landmark will serve its last customers on Sunday. The store is moving to a new, larger location next to the Home Depot in Seven Corners.

General Manager Ryan Sasse said the store has been doing well financially and is moving into a bigger space so it can start marketing patio furniture next to snowboards and ski jackets during the summer. Despite continued redevelopment on the Pike, Sasse says rising rent hasn’t been a concern.

Ski Chalet has been located in an Alpine-style building at 2704 Columbia Pike since 1969. It will reopen in Seven Corners at some point this fall.

Sasse says he is not sure what will eventually take the store’s place on the Pike.