Update on 2/18 – Several public works crews were out on Military Road today. A police officer was posted at Military Road and 26th Road this afternoon to help Taylor Elementary students cross the street. 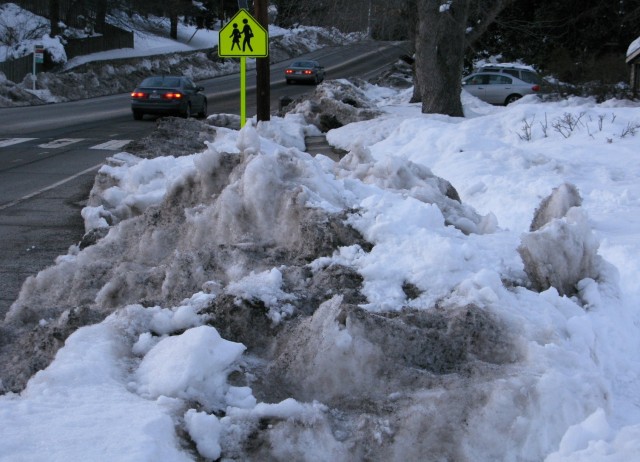 Huge boulders of ice, snow and road filth cover the sidewalks along Military Road in the Donaldson Run section of Arlington, near Taylor Elementary School, forcing pedestrians to walk dangerously close to fast-moving traffic on the busy commuter route.

Over the weekend, the county asked residents to help kids get back to school by clearing the sidewalks in front of their homes. But some residents, fearing retribution for not following through on the request, are asking: how do mere mortals move six-foot-high mountains of icy snow?

“It would take a battalion” to clear the sidewalk, one Military Road resident said.

“I don’t think there’s a way anybody can realistically take care of this,” said another resident. In 23 years of living in Arlington “we never got this much snow piled on the sidewalk.”

Residents we talked to were particularly frustrated by the fact that the sidewalk snow mountains were the result of the county’s own snow removal efforts. After clearing the main roadway, residents said, plows cleared the adjacent bike lane, pushing the snow, ice and dirt onto the narrow sidewalk.

The county has warned that plows, by their very nature, will push snows from the road onto sidewalks and driveways. Residents say they understand and appreciate the snow removal challenges, but add that they should not be responsible for removing such massive amounts of plowed precipitation.

The county, for its part, has been actively treating some walkways. Officials admit, however, that they don’t have the resources to get to every trouble spot as quickly as they would like.

Using shovels, a Bobcat loader and a mini-excavator, a crew of 24 parks department employees and six AmeriCorps volunteers has been busy clearing sidewalks at the request of Arlington Public Schools. So far, however, most of their work has been limited to the Carlin Springs area, near Campbell Elementary, Carlin Springs Elementary and Kenmore Middle School. 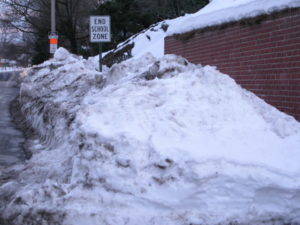 Portions of Military Road near Taylor Elementary are on the parks department’s list of areas to treat, but it will probably be a couple of days until a crew can get to it, according to a county official.

While the parks crew focuses on areas near schools, a crew from the Department of Environmental Services will head out today to assist in clearing high-traffic pedestrian and transit areas. Other DES teams have recently treated walkways and bus stops in Rosslyn and Columbia Pike.

Despite the various efforts to clear walkways, the vast majority of Arlington residents should not expect the county to clear their sidewalks for them.

“It’s the responsibility of the homeowner to clear the sidewalks in front of their home, as it is for businesses and apartment buildings,” said Department of Environmental Services spokesperson Myllisa Kennedy. Still, since Arlington does not have a snow removal ordinance, residents will not be fined for untreated walkways.

Homeowners who wish to report a high-priority walkway in need of treatment should contact the county’s snow removal hotline, at 703-228-6485 or [email protected]. Some residents have complained about not receiving responses to their emailed concerns, but Kennedy insists the county is “monitoring it closely.”