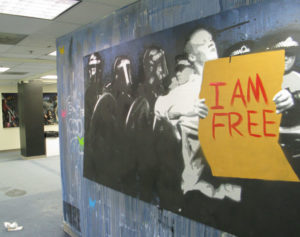 Two artists invited to showcase their work at the G-40: The Summit exhibition in Crystal City were arrested last month after allegedly defacing the roof of the building where the show is now being held.

Maura Judkis of the Washington City Paper reports that two street artists known as Scotch and Jik spent four days in the Arlington County lockup. Police said they caused more than $1,000 in damage to the Plaza Five building at 223 S. 23rd Street.

More from the Washington City Paper.