The following represents the views of the author, not of ARLnow.com. 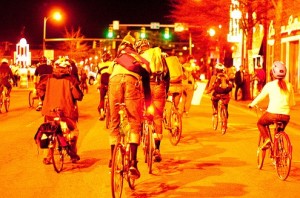 Yesterday the Arlington Bicycle Advisory Committee asked the County Board to recognize the importance of cycling in Arlington as it considers next year’s budget allocations. As any look at our streets will tell you, cycling in Arlington is at an all-time high. Bike lanes are put to good use, the trails are filled with commuters, and bike racks at Metro stations are full.

We are pleased that Arlington County actively promotes cycling, and that County Board Chair Jay Fisette has made it a central part of his agenda this year. In fact, the County Manager’s proposed budget does not specifically target any bike-related funding for cuts (to the best of our knowledge). But we do worry that some may mistake such funding for simple recreational funding. This is not the case and the County Board should resist any such suggestion as it finalizes the budget, perhaps being tempted to cut already-low funding further.

Cycling for transportation and health is — for individuals —  a relatively low-cost choice. However, creating a safe and encouraging environment in which to make that choice does require help from the County. To that end, we respectfully suggested that:

We also reminded the County Board that adequate street paving isn’t just important to those who drive cars. It is also important to cyclists, who often find themselves unable to safely negotiate potholes in traffic – especially the kind that now exists after this winter’s snows. One possible source of improved efficiency (and thus cost-savings) could be found in directing the Department of Environmental Services to take responsibility (from the Department of Parks, Recreation and Cultural Services) for funding the paving and maintenance not just of on-road bike lanes, but also for the Custis and other trails that serve as major transportation corridors.

The Arlington Bicycle Advisory Committee and other local cyclists believe that during difficult economic times, the County should remain committed to making our streets and trails safe for bikes. Cycling provides a low-cost and healthy transportation option, reduces roadway congestion, and is something all Arlington citizens can enjoy.