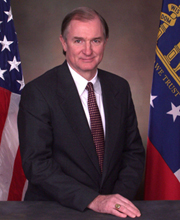 Michael Brown will become Arlington’s new county manager in May. The UVA alum and Northern Virginia native comes by way of Savannah, Georgia, where he’s served as the city’s top unelected official since 1995.

Brown talked to ARLnow.com over the phone from Savannah, where he’s busy preparing for the transition.

This is part one of the interview. Part two will appear later this week.

Q: You’re leaving Savannah, where you’ve served as city manager for 15 years. A lot of people there seem sad to see you go. Is it hard to leave? What convinced you to take the county manager job?

Brown: Well, it is, but you know — 15 years is a long tenure by any measure. Also, I think that a lot of things have been accomplished — not really by me alone, but by elected officials and by [my] staff.

There comes a time when it is possible to consider another chapter, and my wife and I think this is a great opportunity in Arlington. It’s certainly a great place to live and it’s a very good organization to work in.

Arlington has a great reputation, both as a community and as a government. It’s a world-class community and it is really a wonderful community. It’s got great leadership.

Q: There’s a “Change Arlington” movement that wants to take power away from the county manager (and modify the way county board members are elected). Does that concern you?

Brown: I’m aware of it and of course it would concern me, it would affect me. It is democracy — people can make proposals. It seems to me that the present system is working, but that’s up to the board and up to the stakeholders, the voters.

Q: Arlington is dealing with a big budget deficit this year. Your thoughts?

Brown: Well, it does have a budget crunch, but so do a lot of other governments. Arlington, I think, has prepared itself well. There’s no way you can completely prepare yourself for this kind of downturn, but it’s clear that [Arlington has] a robust economy that [the county] helped to develop. It has, it seems to me, a considerable amount of citizen confidence. There’s a lot of policy skill in the board. And there’s a lot of budgeting and analytical capacity in the staff. I appreciate what [acting county manager] Barbara [Donnellan] and the staff have done to get the budget to the board.

I’ve done budgets now for many years. We just completed a budget in Savannah. I presented a balanced budget, and it was based on the same thing [Arlington] is doing: advanced planning, avoidance of layoffs and furloughs and across-the-board-type cuts, strategic thinking. But that’s not a one-shot deal, it’s an every-year deal.

Q: The current county manager’s budget proposal includes cuts to public safety. Do you agree with that approach?

Brown: Well, I’m not there, and it’s not for me to judge from afar. But clearly they put a high priority on public safety, and that’s good. I would say — let me apply this to Savannah — we did a budget that included [cuts to] public safety. There are elements of public safety that can be made more efficient. Overheads costs can be reviewed. There is a necessity to look at all elements of the budget. But of course the priority has to be officers and responders… out on the street.

Q: Arlington is growing rapidly. In Savannah, you promoted development while also focusing on parks and historic preservation. How do you reconcile those seemingly conflicting goals?

Brown: I think Arlington has taken a very balanced approach to growth and they have paid careful attention to sustainable growth. There are those who think all growth is bad and then there are those who think all growth is good. I think Arlington clearly has taken that balanced approach where you allow for growth and development at even density, you do that in ways and in areas that are carefully thought-out, and you engage various stakeholders. Citizens, property owners, the developers, the elected officials — everybody is in that process, sharing values of high-quality community inclusiveness and affordability [and] support for business, including small business.

What would seem to be irreconcilable can be reconciled. There are mechanisms to reconcile good growth. Good growth helps keep the community healthy.