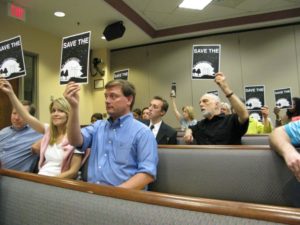 Planetarium supporters were out in force at Thursday night’s school board meeting.

About two dozen sign-holding, banner-unfurling and speech-making residents came to ask the board to keep the David M. Brown Planetarium open.

During his budget presentation, superintendent Dr. Pat Murphy acknowledged the “Save the Planetarium” movement, which has attracted nearly 3,000 fans on Facebook.

“There seems to be strong support for retaining this program,” Dr. Murphy said.

One proposal that Dr. Murphy suggested he was open to was a private endowment, to be created by planetarium supporters.

“The door is open and the collaboration is ongoing,” Dr. Murphy said, hinting at the possibility that the planetarium could remain open for another 12 to 18 months to “see if there is a community groundswell with a commitment of resources.” In other words, supporters would have up to a year and a half to raise sufficient funds for a planetarium endowment.

If that was encouraging news for the planetarium brainiacs, Dr. Murphy also delivered good news for the jocks (we use both terms in jest, of course). A proposed sports participation fee, which would have charged student athletes $50 per high school sport or $25 per middle school sport, has been withdrawn from consideration.

Dr. Murphy said the school system has identified a substantial source of “one-time money” that will allow the board to roll back certain proposed cuts.

While about half the audience at the board meeting consisted of planetarium supporters, another vocal group made up most of the other half. At least a half dozen people, many of them students, made speeches urging the board not to trim instructional time at the Arlington Mill High School Continuation Program. The program lets working students in their late teens and early twenties — especially immigrants — complete their high school education on a flexible schedule.