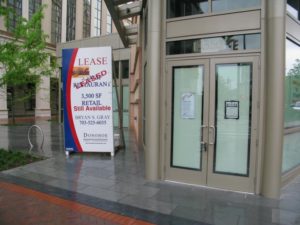 Watch out, American Flatbread. Another wood-fired pizza place is coming to the area, and it’s bringing the heat.

Fire Works Pizza is moving into a large 5,500 square foot space at 2350 Clarendon Boulevard, within walking distance of American Flatbread’s Clarendon store, which opened just a couple of months ago.

Fire Works is setting up shop in Courthouse after the concept proved to be “wildly successful” in Leesburg, Va. But the Leesburg location won’t hold a candle to the Courthouse iteration. The new Fire Works is promising more of everything — more seating, more beers and more pizza.

Management expects a seating capacity of 276. There will be a huge 112-seat patio, complete with a fire pit (assuming the county permits go through). 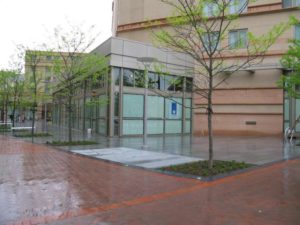 “This space is amazing, everything about it is perfect,” said general manager John Hoffmeyer.

A 26-seat bar will feature 31 beers on tap, two cask-conditioned ales, more than 100 bottled beers and a full wine list. Fire Works will have “a great selection of American craft beers” and hard-to-find specialty beers. It’s also billing itself as “Belgian beer heaven.”

An exposed, walk-in beer cooler near the front of the store may eventually host tasting events.

Many of the signature pizzas will be the same as in Leesburg, but they’ll be made in a much larger wood-fired oven (which will be installed in dramatic disassemble-the-front-of-the-store fashion in about two weeks).

Unlike Leesburg, the new Fire Works will also boast a full kitchen, which will allow them to offer more salads, appetizers and other non-pizza items.

The folks behind Fire Works, who also run Magnolias at the Mill in Purcellville, say they’re excited about their inside-the-Beltway foray. We imagine American Flatbread’s owners are considerably less excited.

Expect Fire Works to open in mid- to late-June.