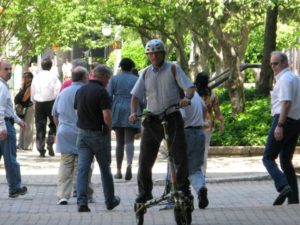 Preston Hewitt is used to the attention. Every time he rides his Trikke down Crystal Drive, people gawk.

“I usually get stares like ‘whoa what is it’ or ‘hey that’s cool,'” Hewitt said during his lunch break.

A Trikke, for the uninitiated, looks kind of like a pair of overgrown Siamese-twin scooters. The aluminum device is described in promotional literature as a “carving vehicle,” after the forward-leaning, side-to-side, inline-skating-esque motion that propels it forward.

Hewitt, who works in missile defense, describes the mechanics behind the motion with a characteristic analogy: “It works just like a satellite… it’s always falling.”

Wherever he is on the Trikke, Hewitt seems to be a magnet for unsolicited comments.

“Very neat,” another stranger comments, before striking up a ten minute conversation.

At 60, Hewitt is perhaps not the image of extreme sports. Nonetheless, he has gained an level of skill on the Trikke (pronounced like “trike”) that much younger men would envy.

He says he got into Trikke riding, as most people do, for the physical exercise. Riding a Trikke is a low-impact way to get a full core workout. It also strengthens one’s thighs and arms.

Hewitt says the fact that the Trikke can be mastered by anyone — from young kids to people in their 70s — is part of the appeal.

“You can be extreme on it or you can be slow and easy and enjoy the ride,” Hewitt said, adding that his wife, who has suffered serious health problems, is also a rider.

In fact, the Hewitts were so taken by the Trikke after reading about it in a Washington Post column last summer they decided to start their own company, Trikke Manassas, the only such firm in the D.C. area.

Mrs. Hewitt is the president of the company. Mr. Hewitt is the vice president. Together they sell Trikkes (price for an adult model: $499) and conduct training classes to show customers how to properly ride one.

Hewitt lives his own sales pitch. On warm, precipitation-free days he folds the Trikke up, takes it on the VRE train from Manassas and rides it to his Crystal City office.

Hewitt says the routine has helped him keep off the nearly 85 pounds he lost in recently. 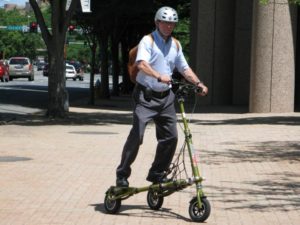 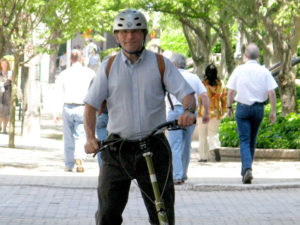