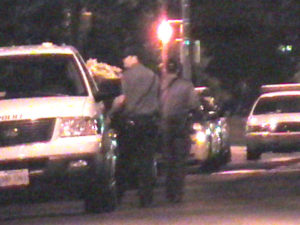 A man dressed in all black and armed with a silver handgun entered the lobby of the Crystal Gateway Marriott (1700 Jefferson Davis Highway) just after 2:00 last night. Hotel employees fled as the man jumped a front counter in an apparent robbery attempt.

After a short time the suspect left the building and headed south on Eads Street. No one was hurt.

When police arrived, however, they believed the man may have still been in the hotel. In a tense scene, officers surrounded the front of the building with shotguns and handguns drawn.

After security tape revealed that the man had exited the building earlier, officers split up to look for the him in the surrounding area. He was not found.