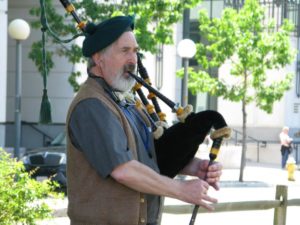 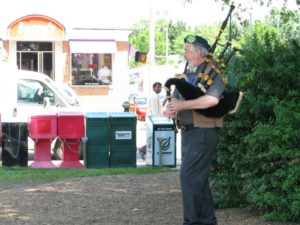 Around 12:30 this afternoon, outside the Courthouse Metro, it was a springtime scene to delight the senses.

The warmth of the sun reflecting off the sidewalk. The smell of Cubano sandwiches wafting over from the Rebel Heroes truck. The sight of smiling, sunglasses-clad people, taking in the perfect weather after an extra-dreary start to the week.

Then, there was faint wail of Amazing Grace playing on the bagpipes.

It was coming from the small park across the street from the Jerry’s Subs shop. Eric Rice-Johnston, an employee in the Arlington County community planning office, was practicing.

Rice-Johnston has been a piper since the early 70s, when he was working as student firefighter at the University of Alaska.

He began practicing during his lunch hour last year, and has just started up again now that the weather is warmer.

Rice-Johnston’s practice session today — he’s getting ready to participate in some bagpiping competitions — included Amazing Grace and the other classic bagpipe tunes, which are usually known for being played at parades and funerals. But there were also a few unfamiliar and upbeat melodies in his repertoire.

Rice-Johnston was not fazed by the confused glances from passersby. He did, however, acknowledge the one individual who applauded.