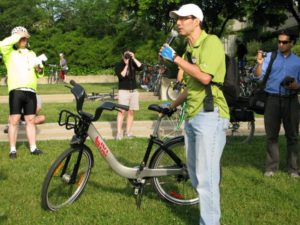 Arlington and the District are partnering to launch the largest bike sharing program in the United States, county board chairman Jay Fisette announced this morning.

At a Bike to Work Day event at Gateway Park in Rosslyn, Fisette called the program “a great system to help us promote cycling and promote health in Arlington.”

Initially launching in Crystal City this fall, the Arlington-DC bike share system will feature 1,100 bikes that will be available for rent at docking stations located primarily around transit centers. Bike usage will cost $5 per day or $80 for a year. Fisette said the county hopes to eventually expand the system to the Rosslyn-Ballston corridor.

County officials say the program will be similar to successful bike sharing systems in Montreal and Paris. Like Montreal, the Arlington and DC will use bikes with enclosed chains and brake cables, built by Quebec-based BIXI.

The program will be funded by the county and by state and federal grants. Some of the operational funding will be provided by the program’s own revenue.