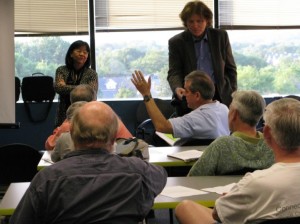 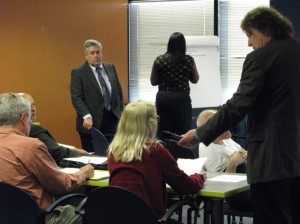 County officials were there to listen. And thanks to the myriad of concerns expressed by residents, there was plenty of listening to do.

At an informal public forum on Arlington’s proposed snow removal ordinance, a group of about 30 residents took turns dissecting every possible facet of the two-page statute.

The proposed ordinance legally mandates that home and business owners clear snow from their sidewalks and prohibits the dumping snow on streets and other public property. A violation would theoretically be greeted with a $100 fine and, if necessary, a bill for the cost of hiring a private contractor to clear the stretch of sidewalk in question.

But what may seem straightforward actually generated a slew of questions:

Those last two questions were the most controversial — and the most commonly asked.

“Giving the county the authority and ability to fine me for not shoveling my sidewalk is a really bad idea,” one man said. “We worked really hard to shovel our sidewalk all the way around, and then the county came along and plowed it over. They were the worst offenders during this winter.”

The county should figure out where residents can lawfully place the snow before enacting the ordinance, another resident said. “For me, the fundamental issue is: tell me where the snow goes.”

For their part, county officials suggested that enforcement of the ordinance will not be a priority. Teams of inspectors will not comb neighborhoods following snow storms, they said. Rather, the county will rely on resident complains (and judging by the large number of complaints the police department already gets about illegally parked cars, there will be no shortage of snow complaints). Once a complaint is received, the offending resident may receive a phone call or other gentle reminder about their civic shoveling duty.

Only when all else fails, and the snow-covered sidewalk is deemed a public safety hazard, would a contractor be dispatched to clear it at the resident’s expense, officials said.

There are other ways the ordinance could promote shoveling without stringent enforcement, at least one pro-ordinance resident pointed out. If clearing one’s sidewalk is required by law, not shoveling would be a major liability — a homeowner could easily be sued if someone slips and falls.

The county board is scheduled to vote on the ordinance at its June 12 meeting.