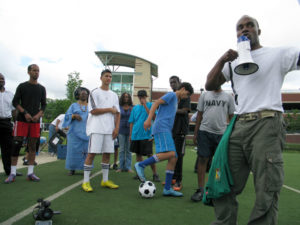 On Sunday, the soccer field at Barcroft Park served as the stage for what some area residents hope will be an official music video of the 2010 World Cup in South Africa.

You wouldn’t know a production with lofty international goals was taking place by the look of things. The catering consisted of a folding table and some Domino’s pizza boxes. The primary camera was an aging standard def digital camcorder. A wheelchair was being used as a dolly. There were no lights set up, no technicians running cables. The director’s mother was one of the dozen or so extras.

But the modest production values didn’t seem to limit the imagination of the producers, most of whom emigrated to the DC area from various parts of Africa. They are on a quest — perhaps a bit quixotic, but a quest nonetheless — to have their catchy dance song, “Twenty Ten In Africa,” played at the World Cup (listen to it here). 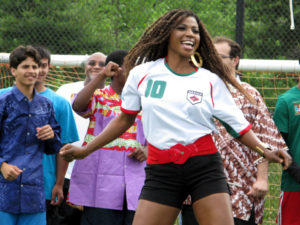 “I want this to be the people’s song,” said Nkeng “Mr. Cole” Alemanji, the song’s writer, producer and video director. He said the first pick for the official 2010 World Cup song was a unpopular with Africans because it was performed by pop star Shakira, who is South American. FIFA, the World Cup’s governing body, should adopt his song because it’s written and performed by Africans, he said.

Alemanji, who runs the Alexandria-based production company Songs From Above, says he was personally inspired to write “Twenty Ten In Africa” after seeing soccer’s “ability to bring people together” during Cameroon’s run for the World Cup in 1990, a time of economic and political upheaval in his native country.

“If people like the song, they’re going to demand it,” said Ajua “A.J.” Alemanji, Nkeng’s brother. Together, the brothers are working to get the song played on radio stations in eastern, western and southern Africa. They say it should begin playing in Johannesburg within a week.

“[Support] is going to come from the ground up,” A.J. predicted.

“The song resonates with the tournament,” said the song’s lead singer, Becky Umeh. “We keep our hopes high that people all around the world will like it.”

“The message in the song is very energizing,” said Umeh, a former television star in her native Nigeria. “It’s what soccer is all about, excitement.”

Umeh, who performs under the stage name Bekina Za, said the choice of South Africa as a venue is giving African artists a new way to reach a worldwide audience.

“This taking place in Africa is actually giving a lot of artists and musicians the opportunity to come out and express themselves,” Umeh said. “That’s what we’re doing now.” 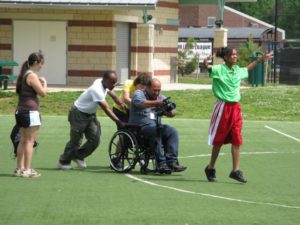 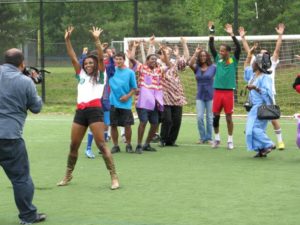 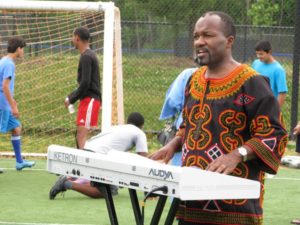 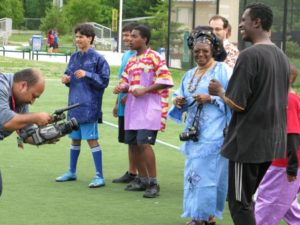