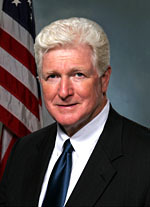 A bill being considered by the U.S. House of Representatives this week would delay the scheduled move of up to 6,000 defense jobs from Arlington to Alexandria.

The language was included in the 2011 Defense Authorization bill by Rep. Jim Moran (D-VA), who is a member of the Defense Appropriations Subcommittee.

Moran says he’s concerned about the traffic on I-395 around Alexandria’s Mark Center, the development where the jobs are set to move to by September 2011 as part of the 2005 Base Realignment and Closure Act (BRAC)..

“If nothing is done and the relocation continues as scheduled, VDOT has stated there will be ‘complete gridlock’ on Seminary Road and Beauregard Street and ‘severe’ congestion between the King Street and Duke Street exits on I-395,” Moran said in a statement.

The bill now before congress would cap the number of parking spaces at the Mark Center at 1,000 and would ban the lease of additional spaces near the development, effectively preventing the relocation of thousands of jobs. The cap would only be lifted when the Defense Department completes traffic improvements that meet congressional approval. It’s not clear how long such a project would take, but it would probably be measured in years.

About 6,400 defense personnel who now work in Metro-accessible office space in Northern Virginia are slated to move to the Mark Center, which is not near a Metro station. About 6,000 of those jobs are with the Defense Department’s Washington Headquarters Services division, which has offices in Crystal City, Rosslyn and Ballston, according to Arlington Economic Development spokesperson Karen Vasquez. The scheduled relocation of those jobs would be delayed if the bill passes, Vasquez said.

“The Pentagon dropped the ball on transportation planning for the base realignment at the Mark Center. A building of this size with no access to Metro should never have been considered at this location,” Moran said. “Now we’re pulling out all the stops to mitigate the consequences of the Defense Department’s mistakes.”