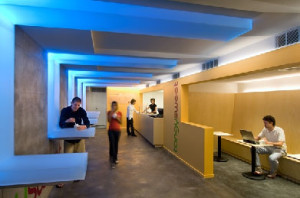 Aaron Gordon is throwing the kitchen sink at his first Arlington project.

Gordon is not only opening a Red Velvet Cupcakery and a TangySweet frozen yogurt store side-by-side on Clarendon Boulevard, he’s also planning to make this his first foray into salads.

“A gourmet salad shop for everyone… I think that concept is well overdue for the Clarendon area,” said Gordon.

He says his as-yet-unnamed TangySweet salad concept will improve on the salad offerings of competitors like SweetGreen, Mixt Greens and Chop’t, which has a location in Rosslyn.

“We’ll make it better and have more to offer,” including more specialized meats, Gordon said. He expects a December or January opening date, depending on when construction wraps up on the building, which is part of the new Clarendon Center development.

The 36-year-old entrepreneur, who grew up in D.C. but spent ten years after college in Southern California, had praise for two of his soon-to-be competitors; he said he’s a fan of Bakeshop and Red Mango, both of which opened this year.

However, he was “not worried” when he heard that NYC-based Crumbs is planning to open a Clarendon location in August. He says Crumbs bakes its cupcakes as a central location and ships them to stores, rather than making them fresh in-store, which gives Red Velvet a competitive advantage.

Gordon says all the local competition “shows that [Clarendon] is a good market for us.”

“We love Clarendon because it’s young and thriving and there are a lot of fun concepts,” he said.