In a flurry of activity last night, the Arlington County Board approved a major development plan, adopted a $1.2 billion Capital Improvement Plan, and heard plenty of citizen input on the controversial East Falls Church redevelopment plan. 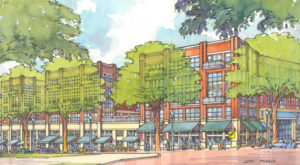 The board approved a developer’s plan to build a nearly 25,000 square foot, 200-unit residential complex at 1900 Wilson Boulevard, the current site of a Hollywood Video store and a small office building. The complex will include a number of street-level retail bays that officials hope will help foster more street life on the stretch of Wilson and Clarendon Boulevards between Rosslyn and Courthouse.

“This building fits into our vision of transforming the Courthouse-Rosslyn area into another great Arlington urban village,” Board Chairman Jay Fisette said in a statement. “1900 Wilson Boulevard is a well-designed building that will enliven that block with its combination of homes with street-level stores and great places to eat.”

Last night the board also adopted a $1.2 billion, six-year Capital Improvement Plan. The plan will fund:

In addition, the board heard public comments on the proposed, controversial East Falls Church redevelopment plan.

END_OF_DOCUMENT_TOKEN_TO_BE_REPLACED

More Stories
Morning NotesKojo Comes to Arlington, Finds That People Like it Here