A large swath of South Arlington was without power tonight after strong storms swept through the area and damaged a power substation in Alexandria.

Throughout Shirlington and all along Columbia Pike, homes, apartment buildings and traffic lights went dark. Police, swamped with calls, were largely unable to direct traffic, even at busy intersections. 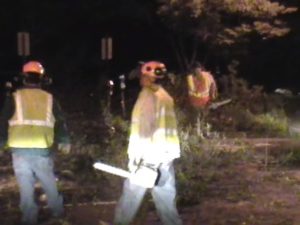 The storms, which hit shortly before dusk, brought heavy rain and gusty winds to the area. WJLA reported that a 55 mile per hour wind gust was recorded in Rosslyn.

In front of Virginia Highlands Park in Pentagon City, the trunk of a tree splintered, sending most of the tree across the road and onto two parked cars. South Hayes Street was closed while crews with chainsaws and a Bobcat front end loader cleared the debris.

Elsewhere in Pentagon City, which escaped the worst of the power outage, large branches littered the sidewalk. On nearby South Joyce Street, in front of the Harris Teeter, a lamp post had come crashing down.

Around Shirlington, neighbors came out of darkened apartment buildings with flashlights to walk their dogs and talk with one another. A block party atmosphere prevailed in some areas.

But others used the power outage as an opportunity to conduct dark deeds.

In Nauck, a group of several men reportedly jumped a man, punched him in the face and stole his wallet.