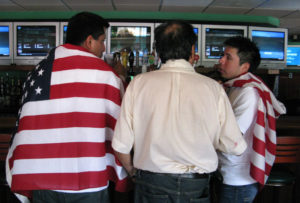 From Rosslyn to Ballston today, pockets of soccer fans could be seen celebrating Team USA’s amazing stoppage-time win against Algeria in the World Cup.

At Piola in Rosslyn, a sizable crowd jumped to their feet when Landon Donovan knocked in the game’s only point following a rebound off Algeria’s goalkeeper. Fans watching the game at Summers Restaurant in Courthouse, who had been bracing for a tie that would have sent the U.S. back home, celebrated wildly.

Along Wilson Boulevard, two cars passed by with horns honking and with passengers holding American flags out windows.

Having grabbed the top spot in Group C, the U.S. team will advance to the next round to face the runner-up of Group D. That game will be held Saturday afternoon.