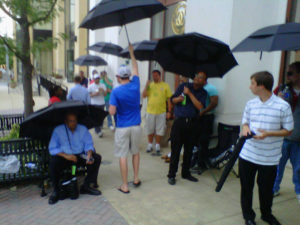 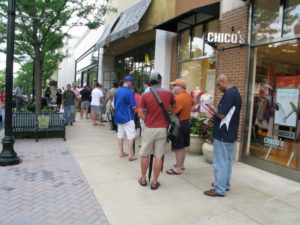 There were long lines outside the Clarendon Apple Store from the early morning to the late afternoon today, as the tech-obsessed made their almost yearly pilgrimage to the local branch of the Church of Steve Jobs. After conquering the queue, happy customers emerged from the store with the brand new iPhone 4, the latest iteration of the beloved smartphone.

Throughout the day, disbelieving reports from Twitter kept the socially-networked apprised of the line length.

At 5:30 a.m. one person reported there were 200 people in line. At 8:00, that swelled to 400. At 4:00 p.m., as the skies grew darker and rain seemed imminent (it only actually sprinkled for a few minutes), Apple store employees handed out umbrellas to many of the 100 people in line.

Finally, around 6:00 p.m., people started reporting that the line was dying down.

During the event, people with cameras could only get one or two shots off before being told forcefully by security guards that photography was not allowed inside or outside the store.