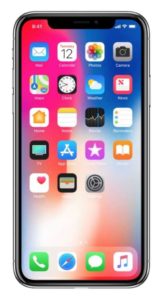 The latter, with its facial recognition, advanced camera technology and “Super Retina” screen, reaches the $1,000 price mark, something that has raised the eyebrows of more than a few Apple critics.

Walk around Clarendon or other Arlington environs and it’s clear that the iPhone is king here, disproportionately more popular in Arlington than it is in other parts of the country, where Android has the market share lead.

Given that Arlington is an Apple town, we thought we’d see how many are planning to take the $1,000 iPhone X plunge. 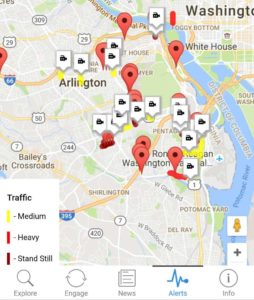 Arlington residents are now able to check the status of road work, look at traffic conditions and access information on local real estate development projects on the County’s mobile app.

The county this week added these and a few other new features to My Arlington, the app for iPhone and Android devices that launched in February.

“County staff enters data into Waze daily, noting if a street is partially or fully closed, along with an estimated time of completion,” Whalen McDaniel added.

Other recent additions to the My Arlington app include:

Want to see for how much your neighbor just sold her house? That’s one of the streams of information in Arlington County’s new mobile app.

My Arlington, the recently-released app for iPhone and Android devices, “puts popular County information about events, real estate, permits and more in the palm of your hand,” says a county press release.

Among the noted features are:

“My Arlington is a terrific new tool that will help us better engage and communicate with our community,” Arlington County Manager Mark Schwartz said in a statement. “We are already working on making the app even more robust – we think this, and other technologies we are looking into, will help us better serve residents and make County government more accessible and transparent.”

The county is “already working on adding more functions to the app, including: traffic disruptions, crime statistics and other useful information.”

My Arlington will supplement other county apps like the ArlingtonVA Service Requests app, which launched in 2014 and allows residents to report potholes, trash collection issues and other non-emergency problems. 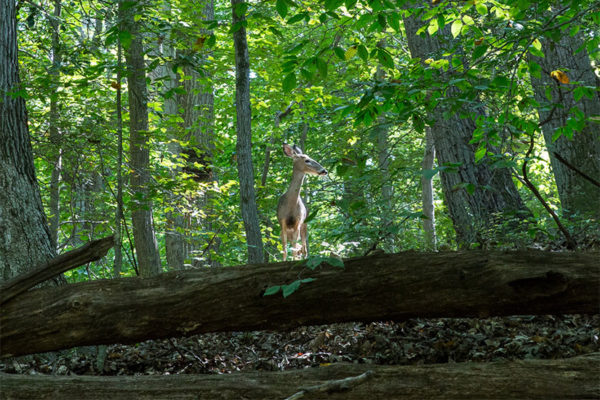 Board Approves Hospital Land Swap Option — The Arlington County Board has taken a first step to completing a deal to swap land with Virginia Hospital Center. The Board unanimously approved a non-binding Letter of Intent giving the hospital an option to purchase five acres of county-owned property adjacent to it. [Arlington County]

Apple iPhone Launch Day — A man has been camped out in front of the Clarendon Apple Store since Wednesday, in anticipation of today’s launch of the iPhone 6S and 6S Plus. The man, whose name is Joe, said it was his fourth year camping out for a new iPhone. [WJLA]

New Play Area Coming to Butler Holmes Park — Butler Holmes Park, which is tucked into a little corner of the Penrose neighborhood near Route 50, is getting a new, $414,000 pre-school play area, to complement the park’s existing playground and rain garden. “Besides whimsical tot lot features like a basket swing, see-saw and fairy tale structure, the project also includes safe play surfaces, a new park staircase and walkway, picnic tables and grills and signage,” said a press release. [Arlington County]

NSF HQ Purchased — An Atlanta-based real estate investment fund has purchased Stafford Place I, the Ballston office building that’s currently headquarters to the National Science Foundation. NSF will be moving out in 2017 and the buyer plans to “aggressively” market the property, which it purchased for $210 million. [Bisnow]

County Board Approves House Purchase — Arlington County will purchase a house at 2827 N. Harrison Street for $728,000, with the intention of knocking it down and using the property to enlarge Chestnut Hills Park. “This is another example of how the County is looking for every opportunity to add to our parks and open space,” said Arlington County Board Chair Mary Hynes. [Arlington County]

Joe Tenne packed his black Tundra truck full of camping supplies Wednesday night, said goodbye to his wife and son — and then headed to the Clarendon Apple store.

Tenne, 43, was first in line at the 2700 Clarendon Blvd. shop to buy the new iPhone 6. The Woodbridge resident, who got a tweet of support from William Shatner, arrived Wednesday at 8:00 p.m.

He was followed by hundreds of Apple fans who waited for the phones Friday morning.

“It’s a whole social experience, in addition to getting the phone,” Tenne, who runs an I.T. company, said minutes before the product went on sale.

A photo of Tenne with a camp chair and cooler caught the eye of Shatner on Twitter Thursday afternoon.

“If you’re by the Clarendon Apple store & see this guy-bring him a coffee or offer to stand in for a bathroom break,” the actor tweeted.

Tenne said he used the restroom in the Apple store and at the nearby Starbucks, and ordered pizza with the second and third people in line — a couple from Alexandria who arrived at the store on Thursday at 11:00 p.m. Tenne, who has staked out the tech outpost for new products for the past three years, said he appreciated the sense of community.

“I’ve met all the store managers and made a lot of friends.”

Before 8:00 a.m., Apple employees ceremoniously removed black curtains from the shop windows, counted down the remaining seconds and then let a first set of customers rush inside.

Tenne bought the thin, fast iPhone and shook the hand of a staffer as he headed to his truck.

“See you next year,” she said.

Asked how he would spend the rest of the day, Tenne said he was headed back to Woodbridge.

“I’ll probably go home and play with it for 15 minutes and then go sleep for eight hours,” he said.

A man accused of stealing an iPhone in the Buckingham neighborhood on Sunday is probably regretting his decision to flee toward Ballston.

Police say the suspect, 19-year-old Chauncey Myers of D.C., grabbed a victim’s iPhone on N. Glebe Road in the Buckingham neighborhood, then took off in the direction of Ballston. The alleged crime happened around 12:30 p.m. on Sunday, and the 22 officers who were providing security at the Taste of Arlington festival in Ballston were notified that the suspect was heading their way.

Numerous officers fanned out from the festival, and the suspect was arrested at the intersection of Fairfax Drive and N. Vermont Street, three blocks from the Ballston Metro station.

Myers was shirtless, out of breath and cursing at officers at the time of his apprehension, according to Arlington County Police spokesman Dustin Sternbeck. He was charged with robbery and “failure to ID.”

The officers working at Taste of Arlington were paid by festival organizers, Sternbeck said.

The incident started when a resident of a house invited a woman inside for a drink early Sunday morning, according to Arlington County Police spokesman Dustin Sternbeck. After the woman left, one or more of the home’s residents noticed items missing, including an iPhone. The victim called police and used a GPS tracking feature to point police to the whereabouts of the stolen iPhone.

Police went to the address provided by the victim and found the stolen items, according to Sternbeck. The suspect confessed on the scene, he said.

BURGLARY, 10/07/12, 1300 block of S. Queen Street. Between 3:30 and 8 am on October 7, a subject entered a victim’s residence and stole numerous items, including credit cards, laptop, playstation 3, cash and an iPhone. The suspect was located through the stolen iPhone GPS tracker. Carole Jean Jamison, 40, of Arlington, VA, was arrested and charged with burglary, grand larceny and larceny of credit cards.

Also on this week’s crime report, police say a man tried to rob the 7-Eleven store on the 200 block of S. Glebe Road, only to have his efforts to grab crash from the register foiled by the store’s clerk. Frustrated by his failed robbery attempt, the man proceeded to “trash” the store, destroying merchandise and throwing things to the ground, according to Sternbeck.

“He was knocking over everything,” Sternbeck said.

The man was arrested thanks in part to the fact that the clerk locked the exits from the store, trapping the suspect inside.

ATTEMPTED ROBBERY, 10/06/12, 200 block of S. Glebe Road. On October 6 at 2:49 am, a subject entered a 7-11 convenience store and attempted to get inside the cash register. A physical altercation ensues with the store clerk and the subject proceeds to destroy the merchandise and items throughout the store while trapped inside. Police arrive on scene and take Darryl Dwight Forrest, 31, of no fixed address into custody. He is charged with attempted robbery, destruction of property, assault and battery and providing false identification to police. He was held without bond.

END_OF_DOCUMENT_TOKEN_TO_BE_REPLACED 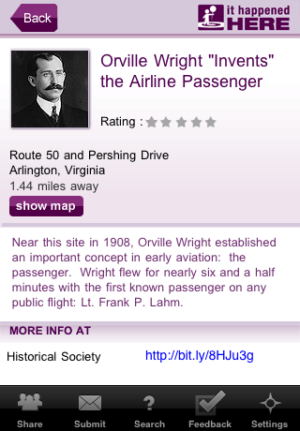 (Updated at 3:45 p.m.) Wondering where exactly the Deep Throat parking garage is in Arlington? There’s an iPhone (and Android) app for that.

A recently-updated app called It Happened Here detects your location and tells you interesting things that happened around you. Currently the app has information on six metro areas, including Washington. Among the interesting waypoints it will tell you about in Arlington:

It Happened Here was developed by Ken Dodelin, an Arlington resident, with the help of some students in an Entrepreneurial Journalism class he teaches at Georgetown University’s Clarendon campus.

It Happened Here is available from the iTunes App Store for $2.99. 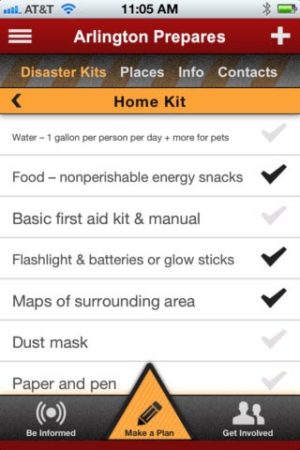 The free app, which can be downloaded from the Android Marketplace and the Apple App Store, gives residents tips on what to do in the event of specific emergencies, provides a feed of Arlington’s emergency alerts, offers a checklist of emergency supplies and lists information about several emergency-related volunteer opportunities in Arlington.

Among the 10 emergencies covered in the “What Do I Do?” section are tornadoes (“if you are inside, seek a place of refuge such as a basement”), earthquakes (“many of the 120 fatalities from the 1933 Long Beach earthquake occurred when people ran outside of buildings only to be killed by falling debris”), and chemical attacks (“immediately strip and wash… look for a hose, fountain or any source of water”).

The app was developed “in-house” by the Arlington Office of Emergency Management and Department of Technology Services. There’s currently no plan to launch an app for Blackberry devices. 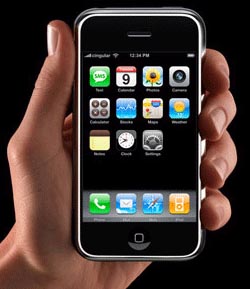 Today, at 1:00 p.m., Apple will unveil its latest iteration of the iPhone. The hotly-anticipated release will be a big moment for the company, with CEO Tim Cook taking the stage in place of charismatic company founder Steve Jobs, who stepped down in August due to failing health.

According to the rumor mill, today’s announcement may only reveal an incremental improvement to the existing iPhone 4. Die-hard Apple fans may be disappointed, as tech blogs predict an “iPhone 4S” to be revealed, as opposed to a more thoroughly-redesigned “iPhone 5.”

Nationally, the iPhone has 27 percent of the overall smartphone market, according to the latest data from Reston-based comScore. The smartphone platform leader is actually Google, which has 42 percent of the market thanks to its Android operating system. Blackberry’s market share is falling rapidly, but it still claims about 22 percent of smartphone users.

How do those stats compare to mobile phone usage in Arlington? Let’s find out.