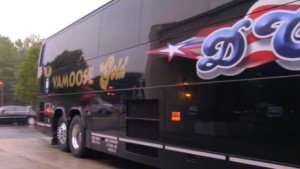 Vamoose, a bus service that runs between Rosslyn, Bethesda, Md. and New York City, has just introduced a new “Gold Bus” to cater to riders who want upscale accommodations.

The bus has 36 seats as opposed to the normal 56. That allows for reclining leather seats that are 25 percent wider and provide a claimed 50 percent more leg room. Vamoose says the seats are larger than first-class seats on airliners.

The “technology-friendly” bus features power outlets at every seat and complimentary internet access.

“We’re the only one on the market that currently has this bus,” Vamoose regional manager Yvonne Brooks-Little said in a video touting the bus’ amenities. “This is a revolutionary new concept… it’s a 21st century bus.”

Tickets for the Vamoose Gold Bus are a revolutionary $50 each way, as opposed to the normal $30.

By comparison, the DC2NY bus, which was the first such “luxury” bus to include free internet, costs $30 each way or $55 round-trip.