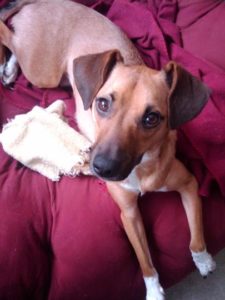 Mago, a female whippet-beagle mix, has captured the most votes in Group B of our Arlington’s Cutest Dog contest. She will advance to the final round of the contest, which starts Monday.

Mago garnered 280 out of 1,520 votes cast. A special tip of the hat to her closest competitor, Fred the Dachshund, who waged an especially spirited campaign.

A bit about Mago: she was “born on the mean streets of Kentucky and lived her first few months foraging through dumpsters.” She eventually wound up at Wagamuffins rescue in Frederick, Md. She was adopted last February and now resides in Rosslyn.

Mago is allergic to dog food and eats “a prescription vegetarian diet.” But that doesn’t stop her from participating in long walks or from sneaking into her owners’ bed late at night.

Congratulations to Mago and thank you to all the fantastic Group B contestants. We’ll be sending you details about a reception at Wylie Wagg for all contest participants.

In the meantime, don’t forget to vote for Group C and Group D.