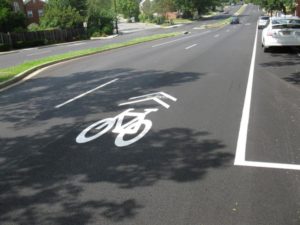 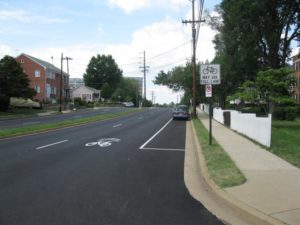 Walter Reed Drive has some new road markings and signs that may seem foreign to most drivers.

The markings, found in the middle of the right-hand travel lanes between South Glebe Road and Columbia Pike, are called “sharrows,” or “shared lane markings.” Together with “Bikes May Use Full Lane” signs, they signal to cyclists and drivers that bicycles have the right to travel down the middle of the lane.

Sharrows are already in use in the District and Alexandria. They’re also in use in the bike-friendly cities of Portland, Seattle, San Fancisco and New York City.

Arlington plans to create sharrows in locations that are “popular with bicyclists and where streets form part of the bicycle network promoted on the County’s official bike map.” More sharrows are being created this year in conjunction with the county’s paving projects. The need for the shared lanes will be evaluated by Arlington’s Traffic Engineering and Operations Bureau.

Sharrows were adopted by the federal government after research from the U.S. Department of Transportation showed that the lanes significantly improved the passing space between cars and bikes while also cutting down on bad bike behavior, such as riding on the sidewalk.

Virginia is expected to officially adopt sharrows later this year.

Update at 3:50 p.m. — Arlington County spokesperson Shannon Whalen McDaniel says the the next spots for shallows will be: