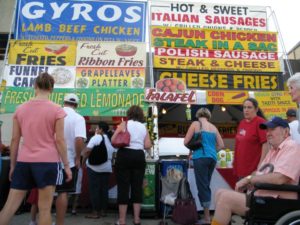 After a sparsely-attended, rainy start to the Arlington County Fair on Wednesday, crowds flocked to the Thomas Jefferson Community Center Thursday evening for the fair’s “official” kickoff.

A who’s who of county leaders attended an opening ceremony that featured the U.S. Army Band Downrange, a presentation of the colors and the Old Guard Fife and Drum Corps.

Among those in attendance were county manager Michael Brown, Rep. Jim Moran (later spotted scoping out the rides for a subsequent fair visit with the grandkids), police chief M. Douglas Scott, sheriff Beth Arthur, most county and school board members, local military leaders, an ABC7 reporter with cameraman in town and a number of servicemen and women.

Most fairgoers skipped the opening ceremony, however, and instead went straight to the rides, games and food stands. The fair’s famous pig races drew a crowd as well.

Lots of photos of fair fun, after the jump.