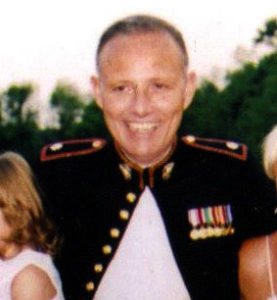 The first thing Dimas Pinzon did when we got him on the phone was ask if we knew how the guy he helped to save was doing (he’s okay).

A day earlier Pinzon — a.k.a. the man in the blue dress shirt — had jumped into the path of a Metro train to come to the aid of a man who fell on the tracks while having an epileptic seizure. Then, after the train stopped short and he had helped to hoist the nearly 200 pound man to safety, Pinzon gathered the papers he had dropped on the ground and casually got on a train toward Union Station.

It’s hard to imagine a more ideal hero under the circumstances. Pinzon, 57, is a retired Marine Corps lieutenant colonel. His father, an electrical worker for the New York City transit authority, used to take him on the subway and teach him about the dangers of the electrified “third rail.” Despite knowing the dangers, Pinzon hurtled two electrified rails in his effort to get the victim to safety.

It all started around 12:15 p.m. Pinzon noticed people screaming on the other side of the station and saw that a man had fallen onto the tracks. At the far end of the station, the light of an arriving train was becoming brighter. Sure that the train was going to hit the man, Pinzon called out for him to lie in the crawl space between the track and the platform. The victim, dazed and in pain, slowly started to get up, but was not getting under the platform.

“I saw that the train was slowing down, and I saw the guy standing up and he was wobbling around, so it was like, this guy’s going to fall back or something bad is going to happen,” Pinzon said. “I just said to hell with it, someone’s gotta get to him.”

He jumped onto the track, stepped over both third rails, hurried over to the man and put him in a bear hug. With the help of two people on the platform, Pinzon lifted the man to safety. After being helped back to the platform himself, he asked the station manager to call 911. With the man being taken care of by the other riders, Pinzon collected his papers and went back to the other side of the station, where he boarded a train to Union Station.

“My job was done, and I figured I’d go on with my business,” he said. 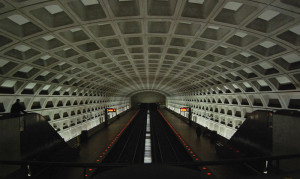 Pinzon said he doesn’t consider himself a hero — he simply followed his Marine Corps training and completed an objective. In fact, he was so focused at the time that he didn’t even pause to notice the train had stopped nearly 100 feet away. He also didn’t notice until later that he had hurt his hand while lifting the man. (Thirty hours later, Pinzon’s hand is still swollen, but he says it’s no big deal.)

The humble father of six said much of the credit should go to the man who ran down the platform and signaled for the train to stop, and to the train operator who quickly hit the brakes.

“I’m just lucky that those two guys were there doing their job so this turned out to be a happy ending rather than a sad one,” he said.

With his hand hurting and with adrenaline still pumping, Pinzon returned to work and emailed his boss.