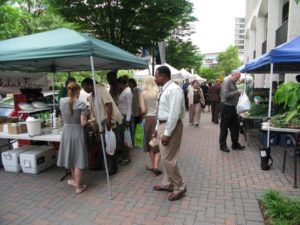 Update at 12:55 p.m. — We’re told development at the space at 2121 Crystal Drive, referenced here, is a long-range goal and not set in stone. Vornado’s current and on-going effort to attract a grocery store is focused on existing spaces in Crystal City.

Crystal City has been without a grocery store for more than five years. But now, as developer Vornado works to attract more residents to the area, it’s also working hard to attract a new grocery store.

The Safeway that had served as Crystal City’s lone grocery store closed its doors in March 2005. The store had been an anchor tenant of the Crystal City Underground for 38 years, but decided to close when surface parking was eliminated as part of the revitalization of Crystal City.

Now, we hear, Vornado is touting the success of Crystal City’s Freshfarm market in an effort to attract a new grocery store. We don’t know much about the closely-held discussions with retailers, but we do know a likely site for a future store — the park in front of 2121 Crystal Drive.

The park is actually owned by Vornado, which wants to liven up the block by replacing the open space with low-rise retail and, possibly, condos. In order to do so, however, Vornado would need to convince the county board that the open space being developed would be replaced by more open space elsewhere in Crystal City.

We talked to Crystal City Business Improvement District President Angela Fox and County Board Vice-Chairman Chris Zimmerman about the potential development earlier this summer. Check out the video from that lively discussion (don’t worry, it’s short) after the jump.