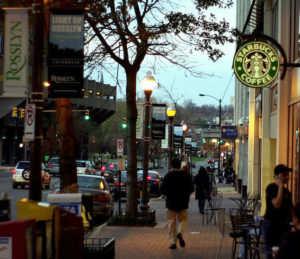 “Rosslyn has seen a surge in residential and retail development,” the Washington Examiner opined over the weekend. “Nearly 600 new housing units have opened in the past year and more than 500 are under construction.”

According to the Examiner, Rosslyn has experienced a “transformation” over the past decade that has made it “cleaner and greener” and a more attractive place to live.

“Rosslyn is becoming much more mixed use,” Rosslyn BID finance director John Seal told the paper. “There are so many things to do here that people tend to overlook.”

Between the DC skyline views and the proximity to downtown, Rosslyn is the “the high-end living destination in Arlington,” one local real estate broker said.

Another selling point: Artisphere, the shiny new cultural center set to open in October in the old Newseum space. (The article incorrectly lists Busboys and Poets as a tenant — in fact, Busboys dropped out and the county is trying to find another restaurant to take over.)

Yes, there’s more housing in Rosslyn as of late, and yes, Artisphere will bring more culture to the area, but retail? The article’s case for a retail resurgence seems much more thin.

Rosslyn-ites, what do you think of your neighborhood’s development?