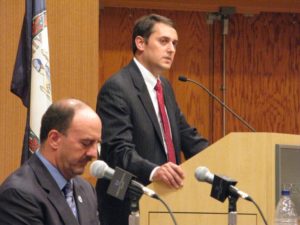 Republican County Board candidate Mark Kelly says county government spending is out of control and he’s the man to help reign it in. If elected to replace incumbent Democrat Chris Zimmerman, Kelly said he would bring “diversity of opinion” to the “out of touch” county board.

“Between 2000 and 2009, the all-Democrat county board increased spending at a rate nearly three times inflation,” Kelly said in this opening remarks at Tuesday night’s Civic Federation debate. “Mr.  Zimmerman recently called that ‘cautious and careful fiscal management… only inside the Beltway would we call that cautious and careful fiscal management.'”

Kelly proposes to scrap the $150 million Columbia Pike trolley system, championed by Zimmerman. If elected, Kelly said he would push for the release of all county spending information online and support a 10 percent pay cut for board members to help pay for it.

Zimmerman, meanwhile, cited the rosy state of the county’s economy and standard of living as evidence that Arlington is on the right track. He rattled off a list of accolades recently received by the county: best place to weather the recession, best place to raise a child, top 10 intelligent cities in the world, and the highest fiscal rating by bond agencies. 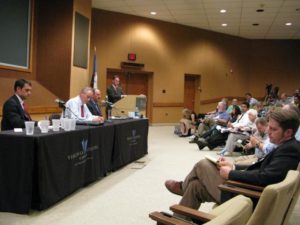 “I’m proud of what we achieved,” Zimmerman said.

In particular, Zimmerman said he was proud of promoting smart growth, public transportation — including the creation of the ART bus system — and affordable housing.

“When you have prosperity, affordable housing becomes more of a problem,” Zimmerman said. “That’s what makes it the thing we have to work the most on.”

On the topic of zoning, Kelly called for more flexibility in the county’s dealing with local business. He said the recent controversy over dog murals in Shirlington and the three-and-a-half hour board discussion about signage and cafe seating is evidence the county is “micromanaging businesses.”

For his part, Zimmerman called for “new strategies to meet the needs of small business.”

“I continue to be dedicated to Arlington’s participatory tradition in planning and government,” he said.

Re-election campaigns have been a relative cakewalk for Zimmerman up to this point. The last time he ran, he carried every single county precinct. But this time, Zimmerman has three things working to his disadvantage.

First, the nationwide wave of anti-incumbent voter discontent, which may or may not have managed to trickle into Arlington. Second, a particularly strong opponent: Republicans we’ve talked to are pretty jazzed about Kelly, who served as the Arlington GOP chairman for the past two years. And third, the albatross around Zimmerman’s neck known at the Metro Board. 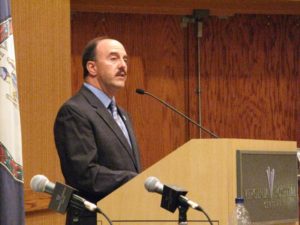 Kelly wasted no time haranguing Zimmerman about the recent slew of problems at Metro, the organization he has helped to steer as a member of its board of directors.

“Mr. Zimmerman has been on the Metro board for 12 years, presiding over a tremendous decline in the safety and reliability of the system while our taxes and fares go up,” Kelly said. “It is the culture at Metro that’s the problem.”

Zimmerman made no apologies.

“I’m proud of the work I’ve done one the Metro board,” he said.

Zimmerman suggested Metro is facing a perfect storm of problems: an aging system, a lack of investment in infrastructure, and a record number of riders — 40 percent more than 10 years ago.

While Zimmerman called for more money to help Metro overcome its problems, Kelly called for an independent voice on the Democratic-controlled Metro board.

“For me it’s a leadership issue, not a money issue,” Kelly said. 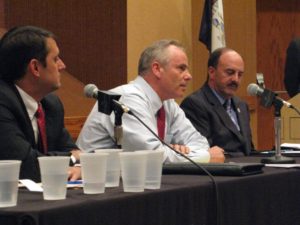 Chisholm said he doesn’t place as much blame on Zimmerman for Metro’s problems, but agreed with Kelly that “a lot of it did have to do with the culture.” He added that more taxpayer dollars should be steered to Metro, so they wouldn’t have to raise fares while running near-empty buses.

Chisholm said that county employees could be asked to look for “creative solutions to budget challenges, so we can keep libraries and community centers open longer.”

“Arlington needs new ideas to meet the complex challenges of our times,” he said.

Chisholm’s closing remarks were focused on the role of young people in solving environmental problems.

“We need to help channel the spirit and creativity of our youth, and to let them know that we are there with them to meet the challenges of a planet under stress,” he said.