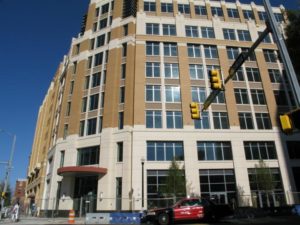 It has been a persistent rumor, but now it’s close to coming true. Trader Joe’s is in the late stages of negotiations to come to a 10,000 square foot space in the nearly-completed Clarendon Center project, according to two people who attended a Lyon Village Civic Association meeting last night.

The store is nearly a done deal, we’re told, except for one big hurdle. Trader Joe’s has said it will only move to the space if Arlington County amends the Clarendon Center site plan to allow reserved parking spots in the building’s parking garage.

As the site plan stands right now, the garage will be open to anybody who wants to park there, whether they’re going to a Clarendon Center store or to a restaurant across the street. It’s a provision that the county desired, but Trader Joe’s fears that there won’t be enough parking left for its customers.

A site plan amendment is expected to be filed on Friday. The matter would likely go before the county board in November. (Update: See county board chairman Jay Fisette’s comments about Trader Joe’s here.)

At last night’s meeting, some Lyon Village residents expressed concern that parking for Trader Joe’s will spill over into nearby neighborhoods. Most residents, however, were supportive of the long-awaited grocery store, we’re told.