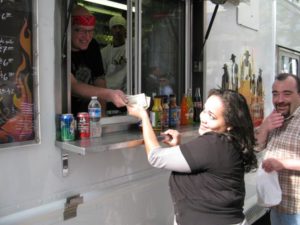 There’s a new mobile food vendor in town, and it’s just one of a host of new mobile lunchtime options that are sprucing up the tired Rosslyn food scene.

BBQ Bandidos served up their first sandwich less than three weeks ago, but already they’re developing a loyal customer base.

“It’s awesome, it’s authentic… you can taste the smokiness of the meat,” said India Hubbard, who along with several co-workers were getting lunch from the truck for the second time. Hubbard said they’ll be back soon to try other items on the menu.

BBQ Banditos serves up American barbeque sandwiches and Mexican cemita sandwiches –all either $6.50 or $7.00 — along with $1 chips and $2 bottled sodas. 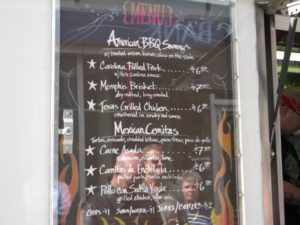 Co-owners Shawn Lucas and Nathan Spittal both came from the restaurant industry, where they have a combined 17 years of experience and most recently held the titles of general manager and executive chef.

Lucas said they came up with the idea for the truck just three months ago.

“We were mad that there was no good barbeque in DC,” he said, explaining the idea’s genesis. He noted that the truck licensed only in Arlington — “for now.”

“We really like Arlington, we like Rosslyn,” Lucas said. “The people around here are really friendly… we have regular customers after two weeks, it’s great.”

The truck recently went to the inaugural Curbside Cookoff in DC, and captured third place. Other than that adventure, Lucas says, the truck has not ventured far from its regular lunchtime spot in Rosslyn.

“I’m not going to say any names, but they’re all on that side of the street,” Lucas said, motioning in the direction of Chop’t, whose manager allegedly threatened to call the police when the truck parked in front of the restaurant recently.

(A police officer checked on the Bandido’s permits just before our interview. It’s unclear if the officer was there after receiving a complaint.)

Rosslyn workers are “kind of tired of the same lemming line that’s impersonal and corporate,” Lucas said of his brick-and-mortar competitors.

He may be on to something. Around lunchtime today, at least four food trucks and carts were parked along Lynn Street, and all had sizable lines. With Rosslyn’s hoped-for restaurant renaissance happening at a snail’s pace, it seems that mobile food vendors are swooping in to provide more selection and sophistication — a quirky, homegrown alternative to the chains.

Rather than competing with each other, Lucas says that the food truck crowd is actually friendly and collaborative. He says he regularly talks with the guys from District Taco and the gals from Rebel Heroes. District Taco and Tasty Kabob were parked right next to each other today, but no one made any threats or called the cops. It was a peaceful utopia of mobile food and happy customers.

Lucas says he expects the truck to venture to other Arlington locales starting next week. In the longer term, he has his sights set on opening an actual brick-and-mortar restaurant.

“We don’t want to sell out of a truck for the rest of our lives,” he said.